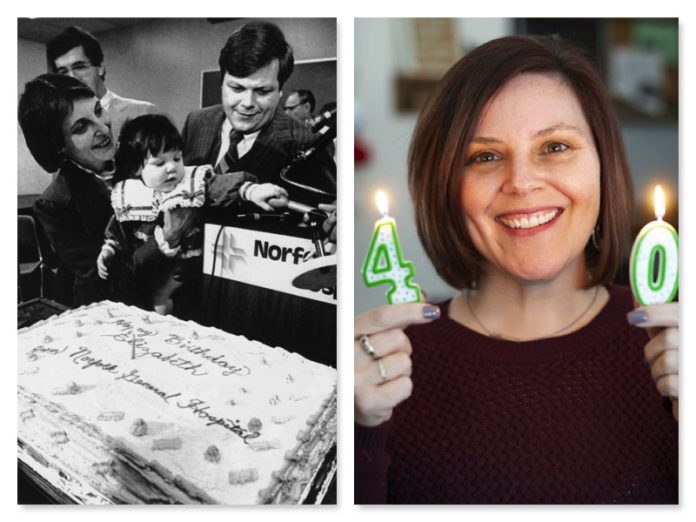 Her birth then, recalled New York Post, attracted fanfare and controversy with a PBS film crew holed up in the delivery room and protesters raging outside the hospital.

“There was always media attention – so I knew I wasn’t born like everyone else,” Carr told The Post from her home outside Keene, NH, days before her milestone 40th birthday on Tuesday.

In fact, she first learned about her groundbreaking entrance into the world when she was around 6 or 7, at her doctor office with staffers watching the NOVA special on her birth.

“My doctors were on each side of me, screening the documentary of my own birth with me — and explaining the science.”

That science was something of a mystery at the time, even to Carr’s own parents.

Judith and Roger Carr, a teacher and engineer both in their 20s, were devastated after multiple failed attempts at starting a family.

Judy could get, but not stay, pregnant: she had three ectopic pregnancies, in which the fertilized egg grew outside the uterus, each one ending in miscarriage and forcing doctors to ultimately remove her fallopian tubes.

Back then, IVF research in the US was dogged by fear and ethical concerns, with Louise Brown — the first baby born via in vitro fertilization — delivered in 1978 in the UK (she turned 43 this past July).

While Judy’s doctor knew little about this new fertility science, he procured a flyer from a recent medical conference and suggested she try IVF, saying, “It hasn’t been tried here yet, but they’ve had some success with a birth in England — maybe you want to look into it.”

They turned to husband-and-wife doctor team Howard and Georgeanna Jones, who founded the first fertility clinic of its kind at the Eastern Virginia Medical School. “My parents flew from Massachusetts, where IVF was illegal, to Virginia, in order to have me,” Carr said.

In vitro, which means outside the body, combines a woman’s egg and a man’s sperm in a laboratory dish. Even though the Joneses considered it research and didn’t really charge any formal fees yet, Carr estimated that the young couple shelled out around $5,000 for hospital bills.

That’s a pittance compared to today’s cost-prohibitive treatments, which can run up to $30,000 for a single IVF cycle, and can require multiple cycles.

“They didn’t have cycles back then. You went in and harvested whatever they could get and implanted one egg. And here I am — that was it,” said Carr of the nascent fertility science that’s grown exponentially in the past 40 years, with an estimated 8 million IVF babies born worldwide, as of 2019.

Carr was excited to become a mom herself one day. “I always knew I wanted to have a family. Of course the running joke in my family was that the headline would read, ‘Test tube baby has test tube baby.’” But son Trevor, now 11, was conceived naturally, without any issues, with her first husband in 2010. (She is remarried.) Still, the pregnancy was stressful. “I was aware, just because of my mother’s history, that at any point something could go wrong.” And while the media sharks started to circle, angling for a story, Carr prevailed upon them to back off until she delivered.

To many people who meet her, Carr represents the life that paved the way for millions more to be born. She said listening to people’s stories of extreme hardship is a “privilege,” even if she’s not totally sure she deserves it. “My running joke is, ‘OK, folks, I really didn’t really do anything — my parents and doctors did the heavy lifting — I just showed up.’”

Still, her life has been filled with unique experiences, like having her baptismal gown on display at the Smithsonian Institute and addressing the UN at age 19.

Her forthcoming book, “Under the Microscope: The USA’S First IVF Baby” (out Jan. 7), got its title from an inside family joke. “It’s a wink-wink about the first photo proof of me was under a Nikon microscope at three cells old,” she said.

“I want people to get an inside look of who I really am … ‘Elizabeth Carr, first IVF baby’ is not the full story or picture of who I am as a human being.”

Her mother, now 68, is alive to fête the upcoming publication, while her father passed away this past June.