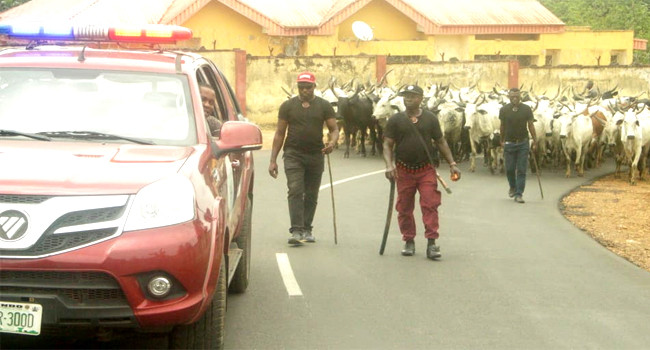 The Ondo chapter of the Western Nigeria Security Network, Amotekun, has seized 100 cows and arrested their herders, for flouting the open grazing law in the state.

Adetunji Adeleye, the state Amotekun commander, confirmed the arrest to TheCable on Monday.

According to Adeleye, the security agency received a distress call that the cows had blocked the Ilesa-Akure expressway.

He explained that operatives of the agency were dispatched to clear the area, during which the cattle and their herders were apprehended.

“The state government came up with a law baning open grazing, night grazing and banning grazing on the expressways. We got a distress call that cows blocked Ilesa-Akure expressway and also entered farmlands and destroyed them, so we moved in and were able to apprehend them,” he said.

When asked about the herders who were in charge of the cows, the commander said they have also been apprehended.

He added that the cows would be released once the herders sign an undertaking not to flout the open grazing law again.

“They’ve been arrested and are now talking to the owners of the farmland. Once they write an undertaking not to destroy farmlands again and they have a way of repairing what they destroyed, we’ll release the cows to them,” Adeleye added.

Franktalknow had reported how governors of the south-west states banned open grazing of cattle in the region.

The development came amid tension in some parts of the south-west region over destruction of farmlands and rising insecurity.