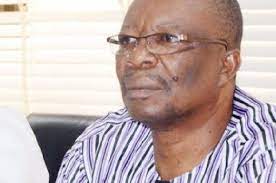 Answering questions from journalists at a press conference on Friday; announcing the approval and accreditation of the institution’s bachelor of medicine bachelor of surgery (MBBS) programme by the Nigerian Medical and Dental Council (NMDC), he said the university demands the withdrawal of the statement from Professor Osodeke.

It will be recalled that UNIOSUN started the MBBS programme with the approval of the National Universities Commission in 2012. The programme was discontinued shortly after due to some operational challenges which led to the transfer of the enrolled students to Ukraine by the State Government to complete their programmes.

Professor Adebooye noted that the NMDC not only approved the MBBS programme but also increased the admission quota for the programme from 50 to 100 students.
According to him, the Michael Okpara University of Agriculture Umudike (MOUA), where ASUU President teaches, does not have UNIOSUN’s achievements.
“ASUU President should go and check my profile, I cannot preside on quack university. He has expressed his opinion and that is his, the University he teaches does not have our achievements.
“He was here this year and commended the quality of what he saw here, the infrastructure, only a few universities. He shouldn’t talk about what he doesn’t know if he wants to continue being a true professor.
A true professor finds facts and bases of whatever they say, he should get educated, I challenge him to get educated.

“Referring UNIOSUN as a quack university is a careless statement and not expected from ASUU President who is a professor; who must not make a statement without facts.” the VC said.

Also,  the Management of Ekiti State University, Ado-Ekiti (EKSU) described the remark credited to ASUU president as denigrating, unfortunate, reckless and unwarranted.
It said Ekiti State University is currently the 14th best university in Nigeria out of about 200 universities (Federal, State & Private) and the 2nd best State University according to the recent Webometric ranking of universities.
It said, “Apart from the above, the university (EKSU) has nearly all its academic programmes accredited by the National Universities Commission (NUC) and relevant professional regulatory bodies.
“The university is proud to have many top-rated globally recognised academics, and its alumni are making waves both Nationally and Internationally.
“By the grace of God, Mr Biodun Oyebanji,  the Governor-elect of Ekiti State is an alumnus and a former lecturer at the University.  Even in ASUU,  staff of our university had served and still serving in various capacities at zonal and national levels including but not limited to Professor Afolabi Popoola, Dr Sikiru Eniola, Profs. Eddy Olanipekun, Ayan Adeleke and Olu-Olu Olufayo.
“Therefore, categorizing EKSU as among the quack and irrelevant universities is a testimony to the fact that the ASUU President is probably uninformed and/or bereft of ideas. This arrant nonsense coming from  Comrade Osodeke is totally unacceptable and condemnable.
“The Management calls on Professor Osodeke to toe the path of honour by retracting the provocative remark and tender an unreserved apology without further delay.”
Also, the Kwara State University (KWASU), Malete, says the institution is founded on the vision of advancing the frontiers of knowledge for the good of society and not as a quack university.
The KWASU Director of University Relations, Dr Saeedat Aliyu, said this in a statement on Friday in Ilorin.
”KWASU Management considers these statements as undeserving of an academic of Prof. Osodeke’s purported status.
”One who should know better than to denigrate institutions of higher learning for one reason that is unrelated to any factor used to measure the standard of institutions anywhere in the world.
”His statements are tantamount to bullying, they are reckless, uncalled for and a denigration of the status he occupies as national head of the union of academic staff in Nigeria,” Aliyu said.
She added that KWASU was the first public university in Nigeria to extend its higher education curriculum to include equipping students with entrepreneurship skills to meet the challenges of the 21st century.
”KWASU is also the leading university which focuses on communities with the aim of solving challenges they face while helping to develop these communities.
”Currently, we are the only university in Nigeria going green in her thinking and activities as proactive measures to save the environment.
”All these reflect in our mantra of ‘the green University for Community Development and Entrepreneurship.
”Again, we are the first institution in Nigeria to mount Aeronautical and Astronautical Engineering as a forward-thinking move to develop human capacity for the nation’s aeronautic and astronautic needs,” she said.
The director explained that many of KWASU’s ideas are being replicated by many other institutions which Osodeke eulogised in his uncritical statements.
She added that KWASU has all of its academic programmes accredited by the National Universities Commission (NUC) and requisite professional regulatory bodies.
”As an institution founded barely thirteen years ago, KWASU has made a name for itself as a University which focuses on breaking new grounds,” Aliyu said.
She, therefore, called for a retraction of what she described as an abominable statement and a published apology to KWASU forthwith from Osodeke.
According to her, the institution will not be quiet in the face of slanderous accusations made against its very existence and contributions.