At just 2, he can count in multiple languages including Japanese which he learned in a day 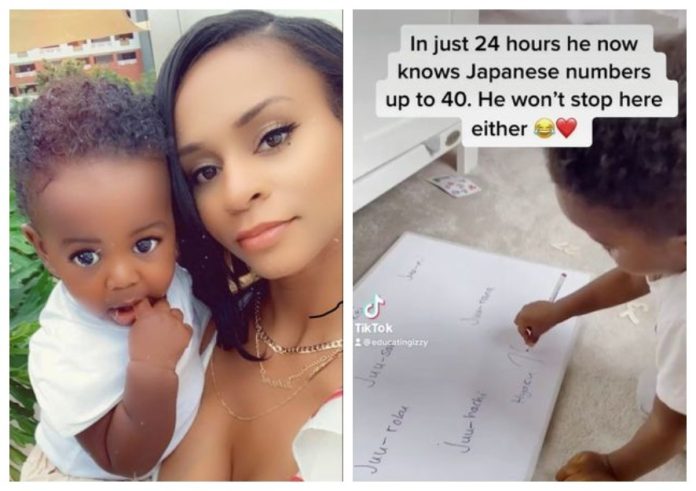 A two years old child, Isaiah Gyamfi has appeared online but unlike many 2-years olds Isaiah Gyamfi is already making a name for himself as an academic genius with keen interest in reading, writing, and counting in different languages while impressivingly solving math problems.

Little Gyamfi can already read, write, and count in English, Spanish and French, Japanese among other languages.

He recently learned how to count up to 40 in Japanese a feat he achieved in just one day.

Jazelle, Isaiah’s mother in an interview has revealed that her son’s ability to quickly capture and memorize new information started when he was just five months old.

“One day Isaiah was watching a phonic video on my phone on YouTube, he scrolled to the videos at the bottom and clicked on a Japanese numeracy video,” she recalled.

“I knew then he was keen on languages, so I showed him a video in Spanish. His eyes lit up, so I decided to buy him Spanish flashcards; he absolutely loved these and would study them every day.”

She also said her son quickly learned how to count in Japanese because of the pattern noting he loves that Japanese has a pattern.

“Once you learn numbers 1-10, it’s very easy to learn the rest. Japanese numbers follow a logical pattern, with a few exceptions.”

“So, it’s a continuous repeat of the same word for different numbers. For example, number 1 is ‘ichi’ and number 10 is ‘juu’….. therefore, number 11 would be juu-ichi,” she continued.

In her interest to improve his visual ability to capture information, Jazelle said she transformed their living room into a numeracy and literacy space when Isaiah was barely four months old.

Upon reaching eight months old, Isaiah correctly identify letters anytime he was asked where a particular letter was.

I was first taken back and thought, did my eight-month-old just call out letters? I remember just laughing nervously but I was so excited and wanted to hear it again,” she told the Mirror.

“I thought maybe it sounded like he said the numbers and letters but he actually said something else. But he continued to say it which confirmed what I thought.

“I remember telling his dad when he got home from work I took Isaiah to the wall where the letter and number stickers were, when he called them out we both stood there just laughing.

“We were first time parents and just felt so proud and excited.” Jazelle said.

An Instagram account has since been created for Isaiah where his mum shares his learning and academic abilities.

Wow, what arm genius Isaiah is. Kudos to the mum for bringing him up this and assisting him in bringing out the best in him.