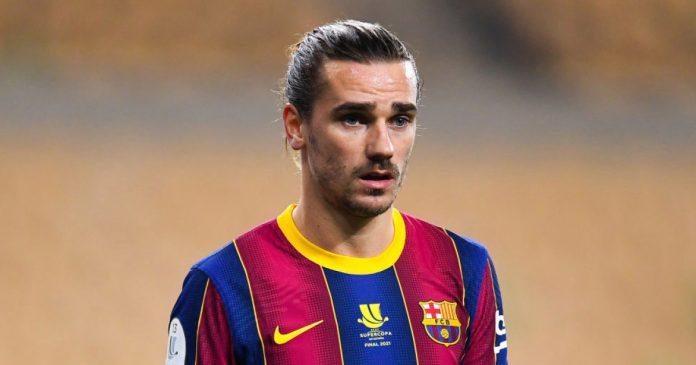 La Liga side, Barcelona are battling with financial crisis as they seek to offload many players this season including sensational signing from Atletico Madrid, Antoine Griezmann.

FC Barcelona president Joan Laporta had confirmed a debt of 1,350 million euros and losses of 481 million euros for last season
Atletico Madrid will need to cough out €50 million to re-sign Antoine Griezmann on a permanent deal from Barcelona on Deadline Day.
According to a report by French publication L’Equipe, Barcelona have slapped a €50 million price tag on Antoine Griezmann amid interest from Atletico Madrid.
The Catalan giants will demand the aforementioned sum from their La Liga rivals if they wish to re-sign him permanently, although the option to loan him also remains open.
Antoine Griezmann joined Barcelona from Atletico Madrid in a controversial switch that left a sour taste in the mouth at the Wanda Metropolitano.
The switch to Camp Nou has not worked out for the best for the 2018 FIFA World Cup winner, who has struggled to replicate his best form for the Blaugrana, although he did show signs of his brilliance at times last term.
To date, Griezmann has managed a return of 35 goals and 17 assists in 102 appearances, while his eye-watering wages have compounded the financial woes for Barcelona, thereby making his signing arguably a piece of bad business for the Catalan club.
However, they now have the chance to cut their losses on the 30-year-old, with Atletico Madrid interested in re-signing him.
This week, there have been suggestions that Barcelona and Atletico Madrid have been in talks over a potential swap deal involving Griezmann and Joao Felix.
However, Los Rojiblancos do not have any intention of cashing in on the Portuguese international, meaning any transfer involving Griezmann will be simple move.

READ ALSO:BREAKING: Olu of Warri dissolves Council of Chiefs, others

Atletico Madrid’s eagerness to re-sign Griezmann makes sense as well, considering Luis Suarez is in the twilight of his career, with fitness issues starting to catch up to him.
To that end, Griezmann is someone who could take the burden off of the former Barcelona striker while also possibly grooming Felix.
As per recent reports, the French forward wishes to rejoin Atletico Madrid, who will need to shell out around €50 million to secure his services. Barcelona are also open to discussing the possibility of a season-loan loan deal, which will give the reigning La Liga champions an option to sign him permanently next summer.
However, if Atletico Madrid press ahead with signing him outright this summer, they will have to pay Barcelona the required €50 million.
What now remains to be seen is if the Colchoneros press ahead with their move for Griezmann or if they end their interest in the Barcelona forward instead.