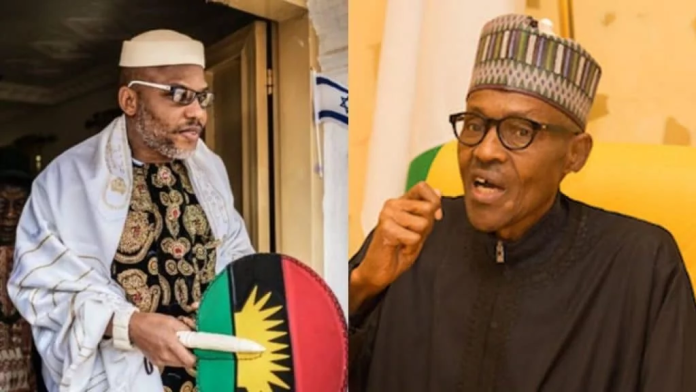 uman Rights Writers Association of Nigeria, HURIWA, has said that some people in the corridors of power in the President Muhammadu Buhari government want to destabilise the South East by the continued detention of leader of the Indigenous People of Biafra, IPOB, Nnamdi Kanu.

HURIWA also berated Buhari for jailing an 80-year-old lady that Nnamdi Kanu reportedly takes as his mother for embarking on solitary protest.

HURIWA noted it is over a year now that Kanu has been kept in detention without conclusive trial.

HURIWA’s National Coordinator, Comrade Emmanuel Onwubiko, in a statement, sought the release of the IPOB leader on political grounds.

According to him, the incarceration of Kanu in the custody of the Department of State Services, DSS, without trial is strange to rule of law.

The rights group said there is nowhere in the world where the executive acts as the supervisors of both the judicial and legislative arms of government except in hard core dictatorships like in North Korea, China, Saudi Arabia and Iran.

The group said that not even the dictator in Syria could treat his citizen like the dehumanising situation that Kanu has been made to live through just for exercising his constitutionally and legally guaranteed right to seek self determination.

HURIWA is “therefore praying President Buhari to grant pardon to Kanu and thousands of his supporters jailed in different detention centres including the 80 years old lady that Nnamdi Kanu reportedly takes as his Mother who was jailed for embarking on solidarity outing at the last court’s hearing in the delayed legal process involving Nnamdi Kanu.”

Recall that Kanu was literally kidnapped from Kenya by the Buhari government as said by the Attorney General of Federation and the Minister of Justice, Abubakar Malami, at a press conference in Abuja in June 2021.

“Ever since, Kanu has been subjected to dehumanising situation in the custody of the secret police in Abuja while his case with Justice Binta Nyako of a Federal High Court in Abuja has been adjourned for about 10 times just to prolong his stay in his jailer’s net.

“It took the Court nearly a year to order the DSS to let Nnamdi Kanu watch Liverpool fc last two matches in the immediate past season- a privilege that even house CHIHUAHUA enjoys in an unrestrained manner.

“The same judge has denied Kanu bail several times even though his health has depreciated significantly over the last 12 months under the horrible condition he was subjected to in DSS custody whilst the Buhari government has defiantly refused all pleas and entreaties even by foremost Igbo elders who tried to explore political solution to the matter,” it said.