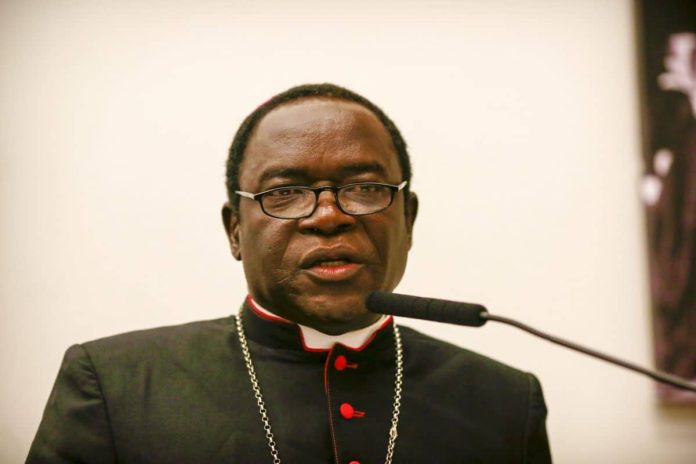 The Catholic Bishop of Sokoto, Matthew Kukah, has described the spokespersons for President Muhammadu Buhari as being inefficient and poor in writing.
The Catholic priest also said he was looking forward to a debate with the Minister of Information, Lai Mohammed, and presidential spokespersons, Femi Adesina, and Garba Shehu, over the country’s state of affairs.
Following his critical Easter homily, Shehu had called on the bishop to leave the president alone or resign and join politics, alleging that the clergyman has been spreading hate for decades.
Reacting when he appeared as a guest on a breakfast show on ARISE TV on Tuesday, Kukah maintained that he is emotional and passionate about the issues affecting Nigeria because he has paid his dues with regard to seeking the solution to the country’s problems even at critical points in its history.
He said, “I don’t know whether any of them (Adesina and Shehu) has the ability or the capacity to speak about guilt or no guilt, but let me first of all set that records straight.
“I delivered my sermon to my congregation in the cathedral. So, the bearer of the message is primarily the good people of the Diocese of Sokoto.
“Of course, I am not unaware of my two friends’ state of mind, Femi Adesina and Garba Shehu, when it comes to talking about Bishop Kukah. They seem to suspend reason and go into overdrive.
“Unless, of course, Garba Shehu has plans to convert to Christianity or a closet Christian or an anonymous Christian, I appreciate the fact that when it comes to talking, he has not quoted the Holy Quran. All he does is end up with some convoluted interpretations of the Bible and embarrassing in their contexts.
“And I am surprised that Femi Adesina, who I believe is a reverend of the sort in the Foursquare Gospel Church, I’m surprised that he’s unable to help his friend who they sat together.
“But let me say that I have made an offer to them and still make the offer that they can choose the venue, choose the time and just let me know. I want to sit down with the three of them, beginning with their minister and both of them. Let us sit down together and talk about Nigeria. I’m ready. I will pay my way, and I still repeat that offer to them.”
The bishop also accused the presidential spokesmen of avoiding issues but engaging in what he called “poor quality writings” to discharge their duties.
He added, “These are the only spokesmen that have spent a lot of time buying, photocopying paper, and simply typing away texts. They have been involved in writing the poorest quality, never talking about the issues.
“So, the first thing is to show you their inefficiency. They are used to writing statements as opposed to talking to Nigerians about policies.
“What this tells you is that 99.99% of what they write implies second-guessing what the president’s mind is. They have no contact with the president. They have no contact with government policies. All they are doing is writing on behalf of the president.
“There is nowhere where the job of this nature is being done and has been done so poorly.”
Kukah stated that he has served under different governments, including the Oputa Panel and getting former President Goodluck Jonathan and then Buhari to sign a peace accord over the 2015 election.
“The reason I am saying so is that I’m no stranger to the process we are in,” he added.
“While we’re doing all these things, Femi Adesina was being paid salary by Orji Kalu. He was doing a good job in The Sun as a journalist. Garba Shehu was working for Atiku. Lai Mohammed was working for Tinubu. So, I think everybody should be able to answer his father’s name.
“And I can say that the reason why I am emotional and passionate about the things of this country and about where we are today is I have paid my dues. Let each of my critics tell me where they were at the most critical moment in Nigeria’s history.
“It’s not that now, people’s bank accounts are swollen. They are probably trying to preach the gospel to us that they don’t believe.”