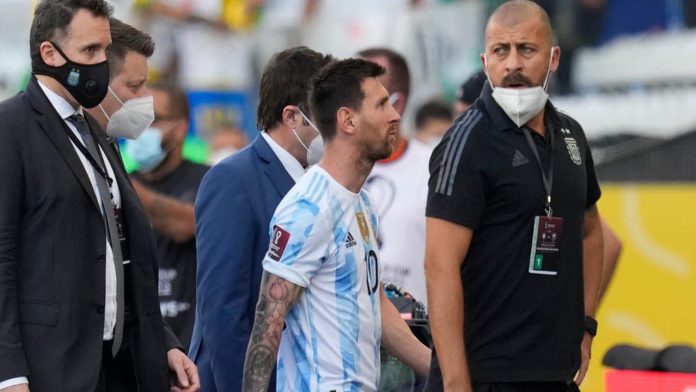 Argentina captain, Lionel Messi was angered on Sunday over the action of Brazil health officials who waited for their World Cup qualifier to start before storming the pitch with policemen to arrest four Premier League players.

The PSG player wondered why the officials should wait until the match had started to create such a scene while the Argentine players have been in the country for three days.

Frank Talk Now reported last night that the game between the two South American heavyweights was suspended and Messi told the officials that the world was watching the scenes.

The Brazil authorities had interrupted the match in the 4th minute as they sought to arrest Premier League players Emiliano Martinez, Cristian Romero from Tottenham and Gio Lo Celso and Emiliano Buendia both from Aston Villa.

The EPL stars were accused of having filled out paperwork incorrectly and avoiding quarantine upon arrival in Brazil, given that they had been in England in recent days.

The Argentina captain was more annoyed about the manner of the Brazilian authorities’ intervention.

“We’ve been here for three days,” he stated when talking in a group that included officials, according to Marca

“Were they waiting for the match to start? Why not warn about this beforehand or at the hotel?

“They could have explained this and it would be sorted. Now, the world is watching,” he said.