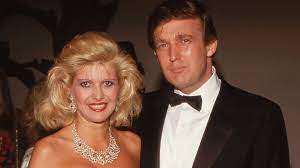 Ivana Trump, the ex-wife of former US President, Donald Trump is dead.

She died of a suspected cardiac arrest at the age of 73 after being found ‘unconscious and unresponsive’ in her New York City townhouse.

It was reported that the socialite was found at the bottom of a set of stairs in her Manhattan home, however, an official cause of death has yet to be confirmed.

News of Ivana’s death was shared by her ex-husband, former President Donald Trump, via a post on his Truth Social account on Thursday afternoon.

‘I am very saddened to inform all of those that loved her, of which there are many, that Ivana Trump has passed away at her home in New York City,’ he wrote.

Trump – who shared three children with his ex-wife – went on to pay tribute to Ivana, describing her as a ‘beautiful, amazing’ woman, while honoring her close bond with their kids: Donald Jr, Eric, and Ivanka.

‘She was a wonderful, beautiful, and amazing woman, who led a great and inspirational life,’ he continued. ‘Her pride and joy were her three children, Donald Jr., Ivanka, and Eric.

Ivana’s son Eric confirmed the news of Ivana’s death to DailyMail.com, saying in a statement issued on behalf of the family: ‘Our mother was an incredible woman – a force in business, a world-class athlete, a radiant beauty, and caring mother and friend.

‘Ivana Trump was a survivor. She fled from communism and embraced this country. She taught her children about grit and toughness, compassion, and determination.

‘She will be dearly missed by her mother, her three children, and ten grandchildren.’

Ivana’s mother, Marie Zelnickova, is 95 and due to turn 96 in September; she was last seen with her daughter in 2019 when the family gathered to mark the matriarch’s 93rd birthday.

Eric also took to Instagram to post a tribute to his late mother, sharing several images of the socialite and her children over the years, including photos of Ivana with her children when they were younger.

According to TMZ, Ivana went into cardiac arrest shortly after lunchtime on Thursday, with the outlet reporting that a call was made to NYPD from someone at her home just after 12.30PM ET.

ABC News reporter Aaron Katersky revealed on Twitter that Ivana was ‘found unconscious and unresponsive at the bottom of a set of stairs in her apartment’, adding that police are ‘investigating whether the fall contributed in any way to her death’.

A grieving Eric was pictured leaving his late mother’s home on Thursday afternoon, at around 4.30PM ET, making his way out of the townhouse alongside his wife, Lara.

Ivana was last pictured out and about in New York City on June 22, when she was seen leaving her Upper East Side townhouse and being escorted to the hair salon.