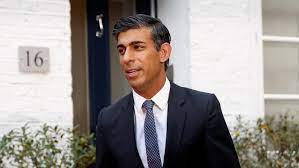 Rishi Sunak is on the verge of getting the keys to Downing Street today after Penny Mordaunt followed Boris Johnson in dropping out of the leadership race.

Mr. Sunak has been named the new Tory chief – and the incoming PM – after his sole remaining rival Ms Mordaunt failed to make the threshold of 100 nominations needed to trigger a run-off.

He was elected Conservative leader and will become the next prime minister after rival Penny Mordaunt failed to secure the necessary 100 nominations from her fellow MPs.

Banging of desks in a Commons committee room, 1922 committee chair Sir Graham Brady said he had received one valid form. ‘Rishi Sunak is therefore elected as leader of the Conservative Party.’

Sunak was to make his first remarks at 2:30 pm (1330 GMT), according to Brady, whose 1922 committee of Tory MPs organised a rapid leadership election following last week’s resignation of Prime Minister Liz Truss.

Former leader Boris Johnson pulled out of the race late Sunday, leaving a straight fight between Sunak and Mordaunt.

“These are unprecedented times. Despite the compressed timetable for the leadership contest, it is clear that colleagues feel we need certainty today,” Mordaunt said in a statement.

“They have taken this decision in good faith for the good of the country.”

The Tories retain a majority in parliament, meaning that as their leader, Sunak will be named prime minister by King Charles III.

Rishi Sunak is said to have enjoyed the fastest journey in modern political history from starting as an MP to becoming prime minister.

He first entered the House of Commons at the 2015 general election, when he won the seat of Richmond in North Yorkshire with 51 percent of the vote.

He held the seat at the 2017 and 2019 elections, winning an increased share of 64 percent of the vote on both occasions.

It has taken Mr Sunak only seven years to go from being a new MP to becoming the new Prime Minister.