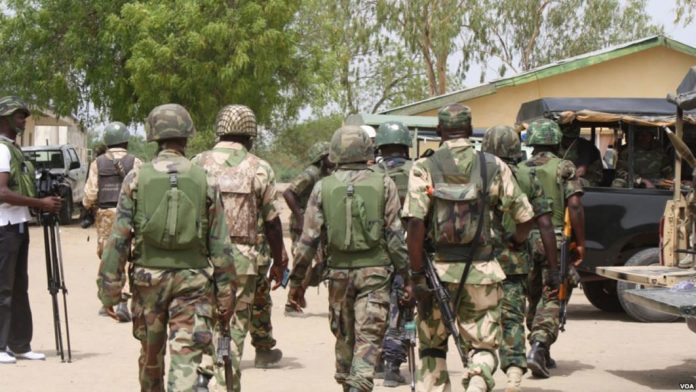 A yet-to-be ascertained number of soldiers has been killed following an ambush on a military convoy by gunmen suspected to be terrorists in Kekun Waje district of Bungudu Local Government Area of Zamfara State, SaharaReporters reports.
The troops were said to have been ambushed during a patrol in the area on Wednesday.
Some of the personnel were said to have been injured during the attack and are currently receiving medical attention.
A military source who confirmed the incident claimed that “about five bodies of slain soldiers have been recovered”.
Both security agents and civilians have suffered several attacks at the hands of terrorists in Zamfara State in recent times.

Agrarian communities in the state have also been terrorised by gangs who raid villages, steal cattle and kidnap residents for ransoms.
In 2019, the state government signed a peace agreement with bandits.
About 15 brand new Hilux vehicles and cash gifts were also given to leaders of different ‘repentant’ gangs of bandits by the governor in 2020.
But despite all these, communities in the state are still being attacked and residents kidnapped and/or killed.