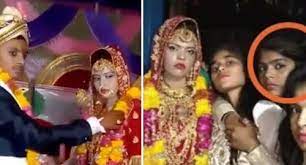 The sister of a bride who collapsed and died at her own  wedding  has married the groom.

A doctor rushed to her aid however she was confirmed dead at the scene.

Despite grieving the loss of their daughter, Surabhi’s family sat down with the family of the groom, Manoj Kumar, and decided to continue with festivities. It was eventually decided one of Surabhi’s sisters, Nisha, would instead marry Mr Kumar.

“We did not know what to do in the situation,” Surabhi’s brother Saurabh told Indian news agency IANS.

“Both the families sat together and someone suggested that my younger sister, Nisha, should be married to the groom. The families discussed the matter and both agreed.”

Video shared by Chinese publication The Paper on its Weibo channel appears to show what is believed to be the new couple tying the knot.

Surabhi’s body was kept in a separate room while the new wedding took place.

The dead bride-to-be’s uncle, Ajab Singh, told IANS it was a “tough call” to make and the family were experiencing mixed emotions.