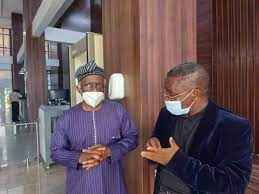 A former Navy Commodore, Kunle Olawunmi, has honoured an invitation by the Defence Intelligence Agency over comments he made on Channels Television’s ‘Sunrise Daily’ breakfast programme last Wednesday.

Olawunmi according to sources visited the DIA headquarters in Abuja with his counsel, Femi Falana, SAN.

His counsel, who confirmed the visit on Tuesday, said, “It was a friendly chat.”

The DIA had invited the ex-Naval officer on Saturday over some comments he made on the programme last Wednesday, August  25.

Olawunmi had described as an “aberration” the  attack by bandits on  the Nigerian Defence Academy, where two military officers were killed and another kidnapped.

“It is an aberration; you don’t attack the Nigerian Defence Academy and get away with it,”  he had said.

He said that the NDA carelessly opens its doors to everyone on Friday for Jumat prayer, thereby giving terrorists the opportunity to profile the institution.

“In 2017, I carried out an investigation by the minister of defence that wanted me to check what was going on with the training and the security there (NDA). I remember I spent about a week in the NDA with the commandant and the staff, but something struck me: every Friday, the gate of NDA is thrown open and everybody has access to pray in the mosque.

“That is the time the terrorists have the time to profile our security environment. It has always been the case. I have served the military intelligence for the past 35 years. Our problem is religion and socio-cultural,” he had said.

He further said that “Recently, 400 people were gathered as sponsors of Boko Haram. Why is it that the Buhari government has refused to try them? Why can’t this government bring them to trial if not that they are partisan and part of the charade that is going on?

“You remember this Boko Haram issue started in 2012 and I was in the military intelligence at that time. We arrested those people. My organisation actually conducted interrogation and they (suspects) mentioned names. I can’t come on air and start mentioning names of people that are presently in government that I know that the boys that we arrested mentioned. Some of them are governors now, some of them are in the Senate, some of them are in Aso Rock.

“Why should a government decide to cause this kind of embarrassment and insecurity to the sense of what happened yesterday (Tuesday attack on NDA)?” he had queried; adding that “terrorism financiers want to turn Nigeria to a Taliban type of country.”