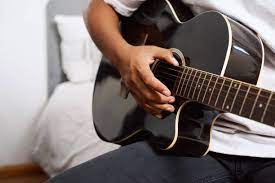 In his bid to curb the rising delinquency among children, a multi-talented singer and instrumentalist, Harrison-Uke Frank, has adopted music as a tool to develop, and channel children’s energy into more positive and creative activities.

This music instructor has created a project aimed at teaching music and harnessing the musical talents of children, and even adults.

The program, called ‘Music Is Fun’ is targeted at teaching various musical skills to children from age four to 14-year-old. They’ll be taught to play musical instruments like piano, guitar, saxophone and orchestra presentations.

Mr. Frank was spurred to create the ‘Music Is Fun’ concert when he noticed that today’s children spend less time playing physically and are becoming socially isolated because their leisure time is spent in front of a phone, computer, or television.

He noted that this worrisome trend affects the mental development of children, making them lose the ability to empathise, communicate and read emotional language.

The artist cited that music has proven to be a great tool in educating children at schools.

He said, “The need to memorize music notes while playing musical instruments or singing has helped students around the world to improve their ability to comprehend and memorize more effectively when doing other subjects.

“Music is both a science and an art. This, therefore, creates a mental balance for students”.

According to Mr. Frank, society must change its perception that music is a career for the poor because nowadays rich people are taping into the various aspects of musical arts to create wealth.

He noted the need to organise and expose children to more musical concerts. “there are only a few events or concerts that help children showcase their musical talents beyond schools or churches. And teaching them only music at churches and schools limits their exposure to a larger audience.

“So the ‘Music is Fun’ concert was conceived to create a platform where young musical talents from ages 4 to 16 can have fun while exhibiting their musical knowledge through musical performances and be showcased to a larger audience.”

Speaking further on his concert, Mr. Frank disclosed that this ‘Music Is Fun’ program is slated for Saturday, 28th May at the Josh Kabana Lounge /Bar, situated in Abdul Oladejo Street, at Mokore, beside Giant Supermarket, Ogun State. The event starts at 10 am, and entry is free.

” ‘Music is Fun’ is completely different from a typical music concert, the concert is open to anyone who wants to take part. Every kind of music/musical instrument is accepted by the participating children. Parents, friends, and neighbours are welcome to watch and cheer the kids as they perform. All of it is free and open to the public.

“In 2017, we nurtured a 13-year-old girl called Iseoluwa to fame by grooming her musically. And with the support of her parents, she recorded a debut single, and also shot an official music video.

“We unveiled her at a press conference with notable print and electronic media in attendance. And this helped to showcase her in notable newspapers, blogs and television stations including Sunrise daily a programme on Channels TV.

“After, we embarked on having her yearly music concert that had in attendance an array of top music stars like Tim Godfrey, Tope Alabi, Mercy Chinwo, and Mike Abdul to mention a few. This concert grew bigger and bigger until 2020 when she relocated out of the country with her parents.

“Following the success of the project Iseoluwa. We have decided to continue to groom talents, create platforms and showcase them to the world on a yearly basis.

“Video content and pictures of the event will be professionally recorded by the ‘Music Is Fun Team’ and posted publicly.

Mr. Frank clarified that the ‘Music is Fun’ is not a competition, he however urged participants to give their best performances as the platform that can help boost their self-esteem and propel them to greatness.

“Putting up a quality performance will definitely put the child’s name on the lips of many who probably may not have heard about the talent before now both globally and locally,” he added.