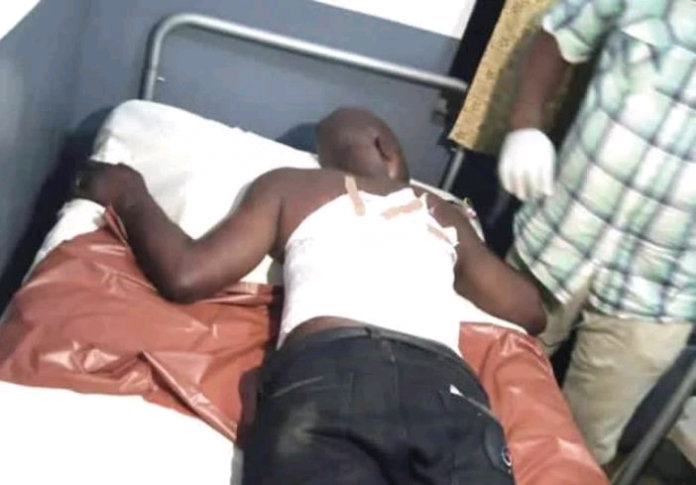 Olujimi Ogunbona, a Nigerian mechanic, has accused some Chinese expatriates and three soldiers led by one Olushola Ogunrinde of brutalising him over a missing car part, according to The PUNCH.

The incident happened at Ofada, in the Obafemi Owode Local Government Area of Ogun State.

It was gathered that one of Olujimi’s customers, who is the landlord of the expatriates, connected him to the Chinese when they needed a mechanic to change their vehicle’s brake pads.

The mechanic was said to have taken the vehicle to his workshop, worked on it for four hours and returned it.

However, three weeks after the vehicle was delivered, Olujimi said the expatriates suddenly summoned him for a meeting at their residence on Jacob Oyejide Avenue in Orogun, Ofada.

He said the officers accused him of stealing the vehicle’s catalyst.

“The Chinese people asked about the missing catalyst and I said I knew nothing about it, as I only changed the brake pads and adjusted the alignment. But as I was explaining, one of the Chinese people kicked my thigh and the impact of the kick caused severe pain in my scrotum.

“I quickly signalled to my son and he fled the compound. As my son Toluwani was running, I heard the soldiers shooting in the air to force him to stop, but he refused and went to inform my friends, who contacted the police.

“I also called the landlord who introduced me to them to intervene in the matter. I have been working for the landlord for 10 years and he never complained about such a thing. The expatriates’ driver is the person that usually calls me to work for them, as I don’t have their number.”

The Ogun State indigene claimed that the expatriates and the soldiers subjected him to torture.

The 50-year-old said, “The soldiers tied my hands and legs, removed my clothes and used belts to beat me till I started bleeding. As they were beating me, one of the Chinese repeatedly used iron to hit my head. They kept saying I should confess to stealing the catalyst, but I declined.

“While writhing in pain, one of the Chinese people suddenly used a substance to rob my bleeding back and face and it burnt me severely. It was when I tasted the substance that I realised that it was pepper and salt. They did all that in the presence of the landlord and later dumped me in their backyard.

“When they realised that my friends and policemen were banging on the gate to rescue me, the soldiers quickly rushed to the backyard, untie me and released me to my friends and the police, who took me to the Mowe Police Station for my statement and thereafter, my friends rushed me to a nearby hospital.”

A picture obtained by newsmen shows deep cuts and marks on Olujimi’s back.

The landlord, identified only as Oyejide, declined our correspondent’s request for the contact of the expatriates, just as he refused to comment on the matter.

He said, “The Chinese people and the soldiers have been invited to give their statements and the acting Commissioner of Police, DCP Abiodun Alamutu, has directed that the case be transferred to the State Criminal Investigation and Intelligence Department for further investigation.”