COVID-19: People relying on witch doctors for treatment  in India 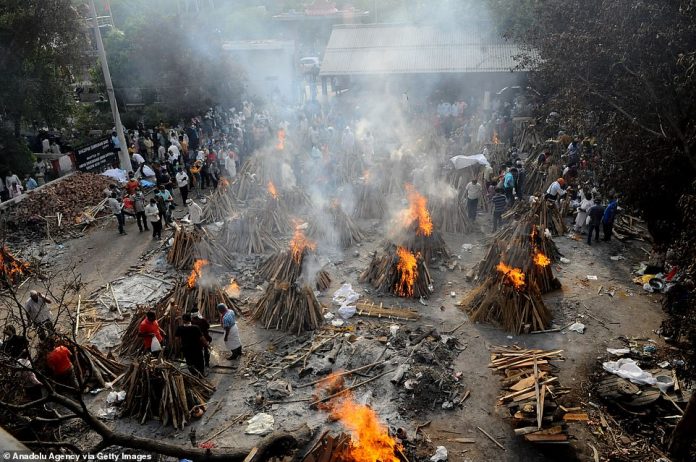 Indians have resorted to seeking help from witch doctors amid surge in cases of COVID-19 in the country.

This is happening as footage of a motorbike being driven through the streets of India amid the country’s Covid crisis shows two sons gripping their mother’s dead body between them as they take her for burial due to a lack of ambulances after she died of the virus.

The brothers, Narendra Chenchu and Ramesh, had been trying to get their mother – in her 50s and named locally as G Chenchu – admitted to hospital in Andhra Pradesh state on Tuesday when she collapsed and died.

With the country’s healthcare system collapsing, the pair were forced to put her on their bike and ride nine miles with her body pinned between them so she could be given her last rites and cremated.

Police initially stopped the trio thinking they were riding with too many people on the bike, but after realising the woman was dead the officers let them go.

‘I wouldn’t wish this upon anyone,’ Narendra said. ‘It is going to haunt me every time I ride this motorcycle.’

Medics said the infection has spread from cities to rural areas where healthcare is often non-existent, with people turning to witch doctors for ‘cures.’

Delhi’s chief minister said the city currently has ‘no vaccines’ available despite the government inviting everyone over the age of 18 to apply for one, and has no idea when more will arrive.

While cities such as Delhi and Mumbai were early epicentres of infection, the virus has now spread to more rural areas where it is causing havoc – as medics say people are turning to witch doctors to help them.

Dr Ashita Singh, head of medicine at Chinchpada Christian Hospital in a remote part of Maharashtra state where Mumbai is located, said she is seeing increasing numbers of patients arriving with branding marks given to them by witch doctors to drive out ‘spirits’ they believe cause the infection.

Others rely on herbal cures while some have fled their villages out of fear of demons which they believe are spreading the disease, which is helping the infection to spread further and faster.

Those who do seek out help at her hospital – which is only equipped to deal with 80 patients – often come only as a last resort, she added, and are usually too sick to save.

The crisis is particularly severe in New Delhi, with people dying outside packed hospitals where three people are often forced to share beds.

Speaking to Radio 4, she said: ‘[There is] a lot of dependence on indigenous medicine, in ancient beliefs.

‘We have a lot of patients who are on our wards right now who have marks on their abdomen because they first went to the witch doctor who gave them hot iron branding in the hope that the evil spirit that is supposed to be causing this illness will be exorcised.

‘[The witch doctor] is their first port of call, only a small proportion will come to the hospital, most will go to the witch doctor or the indigenous practitioner, who will give them herbal medication for their illnesses.

‘A lot of time is wasted and people come in very late and very sick, and a lot of them never come to the hospital so what we see in the hospital is really just the tip of the iceberg.’

Cities and states have rushed to bring in new lockdown measures as the crisis worsens, but there is still no talk of another nationwide lockdown from Prime Minister Modi – who just weeks ago was declaring ‘victory’ over the virus.

On Thursday, Satyendar Jain – the health minister of Delhi which is one of the worst-affected cities – warned he has ‘no vaccines’ left and has not been given a schedule for when more are likely to be delivered.

‘We don’t have vaccines as of now. We have made requests to the company regarding vaccines, we will tell you when it comes,’ he said.

Until lockdowns slow the infection or enough people are vaccinated to stop the virus spreading, its is unlikely that India’s crisis will ease.

The explosion in infections, blamed in part on a new virus variant as well as mass political and religious events, has overwhelmed hospitals with dire shortages of beds, drugs and oxygen. (Mail Online)

UK prime minister, Boris Johnson confirms up to 10,000 football fans will be allowed at sports stadiums from 17 May

Bill Gates held naked parties with strippers in his bachelor days, his biographer claims – and wonders whether the billionaire will go back to...
Read more
Foreign

Hamas militants have fired a large barrage of rockets into Israel on Monday evening, setting off air raid sirens as far away as Jerusalem. Hamas,...
Read more