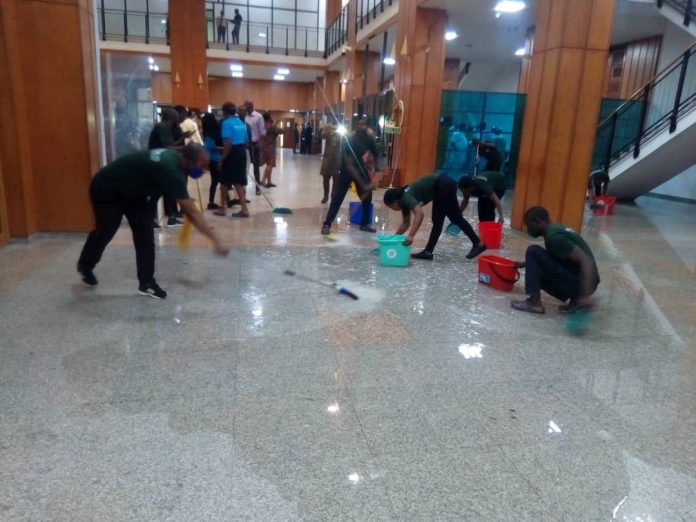 Ala in Taraba and Benue states as the Tiv and Fulani ethnic groups, who have been at loggerheads, have unanimously agreed to embrace peace.

The decision was today arrived at during a joint security meeting between the leadership of the two councils.

“Everyone knows that this place is overdue for rehabilitation. We went to see Mr President and he was gracious and he asked us to meet with FCTA, the owners of the building.

“Myself, the speaker, the late chief of staff and Minister of Finance met to look for money for the rehabilitation of the national assembly. When the N37 billion was approved it was not a national assembly budget, it was an FCDA budget.

“If this place leaks, we are not holding our democracy with the respect it has. We expect the press to inform the people responsibly

“This house is the house of Nigerians. It belongs to Nigerians and it deserves to be rehabilitated.”

Sabi, who is the Deputy Whip, had earlier said there was no leakage in the chamber but around the premises.

He said, “It was reported that because of that leakage, it delayed our sitting. That also was not correct. The leadership had housekeeping matters and until the leadership enters the chamber, sitting would not begin.

“Thirdly and the most critical, was that the leadership approved N37 billion for the rehabilitation. This is nothing further from the truth.”

“When the 9th Senate came on board, the leadership noticed dilapidation and the need for the rehabilitation of the national assembly complex.

“The Senate President and speaker approached Mr President to report this matter and we were all briefed that Mr President was willing to ensure that something is done about it.

“When the pandemic came, the N37bn was reduced to N9bn so we can take the rehabilitation in phases. As we speak nothing is being done.”

Cleaners hired by a facility firm that maintains the White House complex of the National Assembly had a hectic time scooping water from the federal Parliament on Tuesday.

Federal lawmakers, Parliamentary staff, journalists, and visitors to the apex legislative institution watched helplessly as rainwater was dropping uncontrollably from the ceiling of the white house during heavy rainfall.

The White House, which accommodates the two chambers of the Senate and the House of representatives, was completed in 1999 during the regime of the late maximum ruler, the late General Sani Abacha.

The cleaners, numbering about 20, were immediately drafted to the lobby to scoop the water from the flooded part of the edifice.

The leaking roof also spread to the Press Centre in the Senate wing of the nation’s apex legislative institution and also disturbed staff of the private firms especially banks located on the ground floor of the complex.