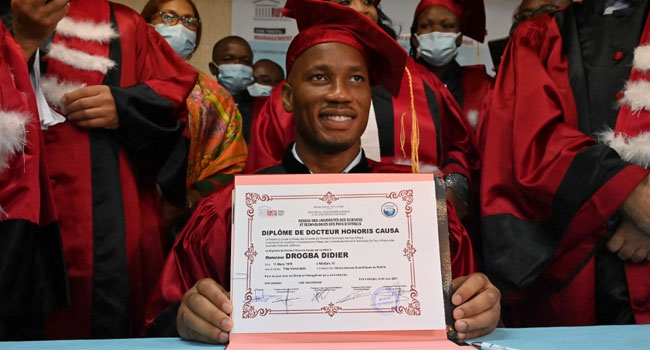 Former Chelsea and Cote D’Ivoire striker Didier Drogba has been awarded an honorary degree by the University of Sciences and Technology of Africa Network (RUSTA) in Abidjan, Cote D’Ivoire.

Drogba according to the university was deserving of the award in recognition of his contributions to nation-building and restoration of peace in his country.

The 43-year-old in the company of his mother Clotilde Drogba received the degree in person at the university premises.

The two-time African Footballer of the Year was honoured for his charitable work and his role in bringing stability to the West African country.

According to Gaol.com, Drogba’s peace-keeping contribution dates back to 2005 when he halted a civil war that had spanned three years after they secured qualification for the 2006 FIFA World Cup with a 3-1 win over Sudan.