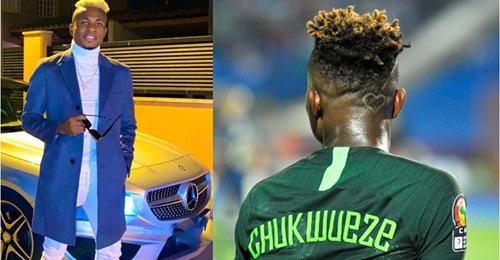 Nigerian international Samuel Chukwueze has posed with his new blonde hairstyle which has got his followers buzzing across social media.

The Villarreal of Spain winger also flashed an exotic Mercedes Benz C300 car worth between N140million and N160million.

This ride is designed specifically for sports stars and is acclaimed for its sporting soul, impeccably detailed cabin and class-leading innovation.

C300 puts the owner at the forefront of luxury. And with its 255-hp turbo engine, it lets the driver enjoy pulling ahead of the crowd.

As per Naija Fame, the 21-year-old star is rated one of the richest and most influential Nigerian footballers, with an estimated net worth of $1 Million as of 2021.

Just like he does on the pitch of play against opponents, Chukwueze is said to be stylish and can spend huge amount for his comfort.

Following his exploits for Spanish La Liga side Villarreal in the month of April, Chukwueze has been nominated for LaLiga Player of the Month.

The Nigeria international scored thrice in five league appearances for Villarreal in the month.

He found the back of the net twice in their 5-1 away win at Levante and was also on the score sheet in Villarreal’s 2-1 defeat to Barcelona last weekend.

Before the fixture away at Levante, the Nigerian international had only managed to score one goal in the current league season out of 24 matches.

So far this season, Chukwueze has scored four goals in 27 league appearances for the Yellow Submarine this term.