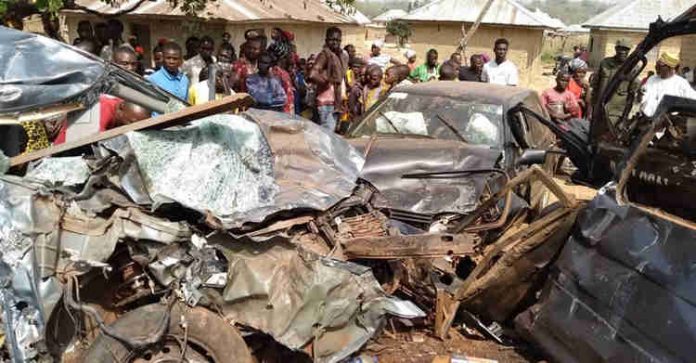 Four persons lost their lives in a ghastly motor-accident which occurred at the Spera-en-deo junction of the Ogoja-Abakaliki-Enugu federal highway on Monday evening.

The Ebonyi Sector Commandant of the Federal Road Safety Corps (FRSC), Mrs Stella Uchegbu, confirmed the fatalities in an interview with the News Agency of Nigeria (NAN) in Abakaliki.

Uchegbu said that the accident involved two vehicles: an articulated vehicle and a bus.

“Eight persons were involved in the accident: five female, two male and a child.

“Four persons were injured: three female and a male while four people died: two female, one male and a child.

“The injured persons had head, hand, neck, leg and general body injuries as the accident was caused by overloading and speed violation,” she said.

She said that four handbags and three cartons of goods were recovered from the scene while the victims were evacuated to the Alex Ekwueme Federal University Teaching Hospital Abakaliki.

“The doctor confirmed the death of four persons and their corpses have been deposited at the hospital’s morgue,” she said.