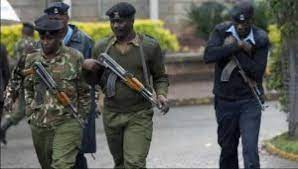 Operatives have tightened security in Ekiti State ahead of Saturday’s governorship election, the News Agency of Nigeria (NAN) reports.

Operatives of the Nigeria Security and Civil Defence Corps (NSCDC), Nigeria Police, Nigerian Army and other law enforcement agencies were observed on patrol in the state capital, Ado-Ekiti, and other parts of the state ahead of Saturday’s governorship election.

A NAN correspondent, who monitored security preparations for the election in Ekiti, also saw personnel of the NSCDC and Police at some strategic points in different parts of the state keeping vigil to ensure a hitch-free election.

Recall that the NSCDC said it had deployed no fewer than 9,747 personnel while the Nigerian police deployed over 17,000 men in the state to ensure adequate security.

A resident in Ado-Ekiti, Mr Joshua Aremu, in an interview, described as impressive the security personnel deployed in the state for the election.

He said the massive security deployment had allayed the initial apprehension of residents over the peaceful conduct of the election.

“I hope their presence encourages people to come out and vote because we all need to vote in all forthcoming elections for those we feel are fit for the respective positions,” Aremu said.

Also, a trader, Mrs Kemi Odesanya, said the presence of security operatives and others for the election in the state had led to increased sales.

She said since the arrival of visitors and security operatives to the state, sales had increased, “which implies more money for all traders”.

Odesanya said she intends to perform her civic obligation by coming out to vote in the governorship election because the state deserves a leader worthy of the position.