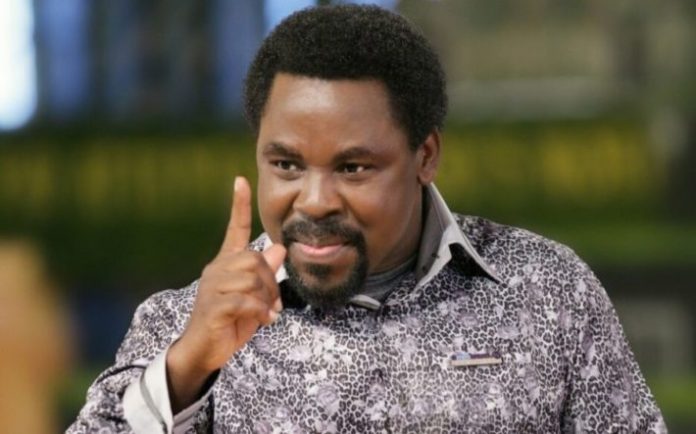 Pastor Folorunsho Emmanuel Bamiduro, a childhood friend and ex-classmate of the late founder of Synagogue, Church of All Nations, Prophet Temitope Balogun Joshua spoke about the early life of the renowned prophet and how he started his ministry.

Bamiduro during an interview with The Nation stated disclosed that the popular televangelist and philanthropist started from the Celestial Church of Christ before establishing Synagogue Church of All Nations (SCOAN).

How much of the late Prophet T.B. Joshua did you know?

There is a linkage between us. We were childhood friends. I am a native of Ikare- Akoko while Prophet Temitope Balogun Joshua was an indigene of Arigidi-Akoko in Ondo State. I must say that Akoko indigenes love themselves very much and love to do things together wherever they live, because we are unique. He was a confirmed prophet because Akoko is one of the Yoruba towns renowned for producing great prophets, just like Ijeshaland.

There is the story that the late Cherubim and Seraphim Church founder, Prophet Moses Orimolade, who is also a native of Akoko, had blessed the area by dipping his rod into water and prophesying that Akokoland would produce many prophets. Hence, many people, including the late Christ Apostolic Church (CAC) founder, Apostle Ayo Babalola, who carried out the greater part of his missionary work in Akokoland, myself and the deceased (Joshua) are prophets today.

READ ALSO:  How I became friends with TB Joshua in Kuje prison by FFK

Joshua was very cautious and exhibited circumspection in choosing his friends right from when we were in school at Ansar-Ud-Deen (AUD) Grammar School, Ikare-Akoko, Ondo State. He was much obsessed with reading (James) Hardley Chase and Shakespeare novels, while I loved and still love to read novels about war and combatant stories because my childhood ambition was to join the military. He was fond of guarding his novels jealously by keeping them under his armpit when in school, because he didn’t want them to be stolen or borrowed by anyone.

We both had a circle of friends in school back then. The current Special Adviser on Tourism and Culture to Governor Kayode Fayemi of Ekiti State, Wale Ojo-Lanre, was one of our classmates and friend, and others like Rotimi Aromolaran and Barrister Wole Ademuwagun.

What kind of person was he in school back then?

He was a boy with many characters. He was a very brave student, very funny and comical, and made people laugh. He also loved to be alone most times.

What year did you finish school?

All of us, including Joshua, graduated from the school in 1982, and we never met again until a few years later.

Did he show any traits of potential clergyman while you were growing up?

Yes, he was fond of beating drums in church and singing during our Wednesday and Sunday fellowships in school, and he was generally a very mystical character in the way he conducted himself.

At what point did you reconnect with him after your secondary school days?

We got in touch about five years after we left school and we continued with our friendship.

Prophet Joshua actually lived with me when he relocated to Lagos. I had been living in Lagos before he joined me, and he lived with me for four years at my residence somewhere in Lagos here.

He later moved on with his life and I also started my missionary work somewhere in Abule Egba, a Lagos suburb, while he established his church in the Ikotun area of Alimosho.

No man falls down from the sky. He certainly has his own history in the vineyard and how he trained and worked with some clergymen before founding his own church. What I know is that he trained and worked under two men of God who are also late now. I know that in the beginning when he relocated to Lagos, he started his cleric work in a white garment denomination, Celestial Church of Christ (CCC) to be precise, before he founded his own church – Synagogue Church of All Nations at Ikotun. Those who say he had no background as a cleric are only envious of him and his outstanding ministry.

Did you keep in touch with him regularly before his death?

We kept in touch on the phone once in a while because of our busy schedules. I am very busy and he was always very busy too. Most of the time he gave me appointments to see him, I couldn’t make it because I was also very busy with my church activities and rights activism.

Did you have any plan to see him before his death?

We had fixed our reunion for December because it had been a long time we met as ex-students since we left secondary school. One of us, Rotimi Ademuwagun, is the one coordinating all members of our set for the reunion. Joshua had met with him and they had discussed extensively the reunion programme. We were all looking forward to the event, not knowing that he would die so soon.

How did you feel when you received the news of his death?

My reaction was that of a delayed shock. I still don’t know what to say now because his death is a colossal loss to the entire Akokoland.