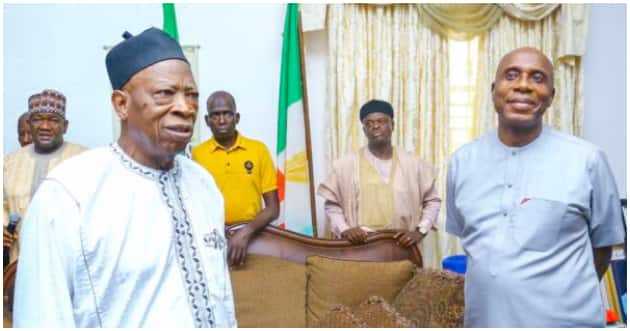 It is no more a secret that the minister of transportation, Rotimi Amaechi, recently paid a visit to Alhaji Abdullahi Adamu, the new national chairman of the All Progressives Congress (APC) in Nasarawa.

But the visit has generated a lot of allegations and speculations and has been linked to Amaechi’s bid to emerge as Nigeria’s next president while he advances his nationwide consultations in this direction.

There is a growing scandal that the minister was at Adamu’s Keffi home with bags loaded with money to win the APC chairman’s heart.

This rather hasty and unconfirmed conclusion stemmed from a photo of Amaechi and Adamu in which some bags were seen behind both men during the said visit.

According to a Twitter user, T’Challa: “You see the loan Buhari and Amaechi have been incurring from China for railway stored in those 3 Ghana-Must-Go bags.”

Another Nigerian by the name of Ugochukwu on the same social media platform alleged:

“See Amaechi that said he does not like money. Behind them are bags of money which @ChibukeAmaechi brought to APC Chairman.”

However, there is no evidence that the said bags contain any money; moreover, if the bags were loaded with cash, no one can prove at the moment that Amaechi brought them in the first place, let alone for the purported purpose.

Added to this, one Habeebah Suleiman, claiming to be in the entourage of the minister during the visit, noted that Amaechi did not even spend up to half an hour with Adamu.

Suleiman said: “Very unfair. I was there yesterday (Saturday) at the Keffi residence of the APC national Chairman the whole day.

“When Amaechi walked in, he just stayed for 20 minutes and left. Not even 1 security detail escorted him into the house and certainly, he wasn’t accompanied by any Ghana Must Go bag, not even a man handbag.”

The claim that Amaechi came with bags of money to visit the APC boss is nothing but unfounded speculation devoid of proof and fact.