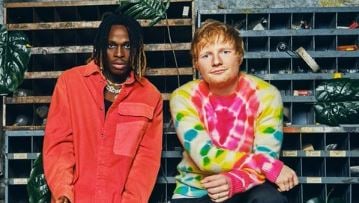 Grammy award-wining British singer, Ed Sheeran, has thrilled fans with the remix of Fireboy’s song, ‘Peru’, which was released on Friday.

Fireboy had announced the release with a tweet, as he appreciated his team for making it possible.

Sharing an e-flier of the remix, he wrote, “Out now worldwide! ‘Peru’ x Ed Sheeran produced by Shizzi. Big love to my amazing team and everyone who made this possible. This is history. Let’s run it up!”

Less than 12 hours after the song’s release, fans have taken to Twitter to hail the British singer for his verses in the song.

READ ALSO: I will leave office in 17 months, says Buhari

A tweep, @deejayfaremi, said, “Fireboy went ahead and gave Ed Sheeran a platform to show his skills.”

“No! No!! Ed Sheeran just made “Peru” glow up with that remix. Big up to Fireboy DML,” @iamkofoworola tweeted.

@ Snehqueenbee tweeted, “Ed Sheeran x Fireboy is one of the collaborations I thought would never happen in two years. Our generation is so lucky.”

“Ed Sheeran was amazing on that Peru’s remix. He took it as his personal project,” @lolaenioa pointed out.

Singing Ed Sheeran’s praises, @_semmanuel said, “Ed Sheeran stole our song. Like seriously, I was very surprised how he swiftly embodied the flow of the song. This song will blow all over the world.”

The song was released barely two weeks after Ed Sheeran confirmed that he has recorded the remix for Fireboy’s hit song, ‘Peru”.

During the interview, Ed Sheeran had revealed how Fireboy contacted him for the remix.

When Fireboy announced the original Peru song in July, the Champion crooner note that he was working on his album.