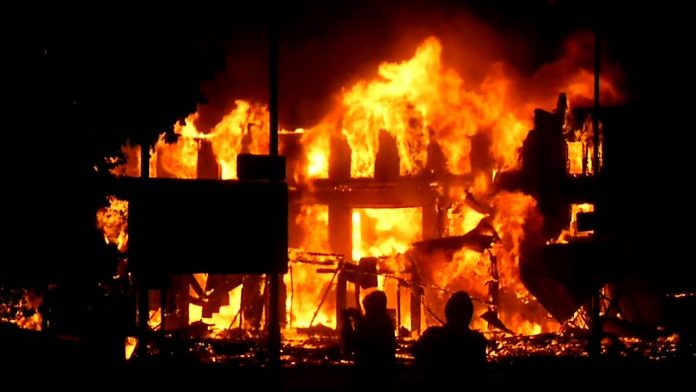 A father identified as Uwekwe Solomon has lost two of his biological children and a niece during a fire incident in the Rumuochakara, Obio/Akpor Local Government Area of Rivers State.

According to Punch, the fire which occurred on Monday night was caused by a candle.

However, Solomon stated that he does not have any candle in his home.

The fire was said to have spread and razed two other buildings in the area.

Solomon also revealed that his three other surviving children were in critical condition.

He further said the children suffered up to 90 per cent degrees burnt, saying he has no idea of what caused the fire as they had retired to sleep

He said, “Yesterday as we slept, what I heard was my wife shouting fire, fire, like a dream, I rushed, passed through the fire to try to rescue my children.

“But I was able to rescue three, then I lost three as a result of the fire. I have slept around past eight. And this thing happen by 9 to 10 pm.

“There is no candle in my house. I don’t know how the fire came about. I felt like dying with them (children). I wanted to run into a moving car, but my neighbours held me.”

He also disclosed that one of the children that died is his sister’s child. He said the girl had visited their residence for holiday but had decided to stay back in Port Harcourt to continue her schooling.

When contacted, spokesperson of the state police command, Grace Iringe-koko, said she was yet to get details of the incident as of the time of filing this report.