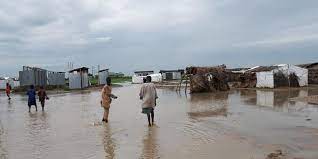 The National Emergency Management Agency says 15 bodies have been recovered from the River Ngadabul in Maiduguri, the Borno capital.
Muhammad Usman, the northeast coordinator of NEMA, said this on Wednesday in an interview with NAN.
Over the past few days, heavy rainfall has led to flooding in many communities in the northeast region of Nigeria, especially in Jigawa, Yobe, and Borno states.
On August 30, floods due to heavy rainfall destroyed the Katarko bridge linking Gujba and Gulani LGAs to Damaturu, the Yobe capital.

READ ALSO: Your support in our struggle not needed– ASUU hits at NANS

Katarko bridge is one of the major bridges along the Damaturu/Buni Yadi/Biu road that links Yobe with Borno, Adamawa, Gombe, and Taraba states.
TheCable had also reported that the State Emergency Management Agency (SEMA) in Jigawa disclosed that 51 people have died as a result of flooding in Jigawa communities.
Speaking on the flooding incident in the northeast, Usman said cases of drowning have increased due to the river which has overflown into communities in Maiduguri.
“NEMA, as a disaster agency, has been engaged in serious sensitisation of the public on dangers of flooding and precautionary measures,” he said.
“We have had meetings with various stakeholders on sensitisation and providing relief materials to affected communities.”
Meanwhile, in a related development, the Borno command of the Nigeria Security and Civil Defence Corps (NSCDC), has deployed its personnel along the river banks to discourage children trooping to the river to take a swim.