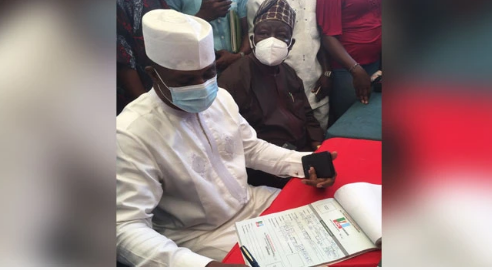 According to news that was published by Channels Television this evening, it has been alleged that the former speaker of Nigeria’s House of Representatives, Honourable Dimeji Bankole has today defected to the All Progressives Congress of Nigeria, after he registered as the party member in Ogun State.

It was made known that the former speaker was accompanied by a crowd who supported his decision, as he registered at Ward 10, Iporo Sodeke in Abeokuta, Abeokuta South Local Government Area of Ogun State.

After he registered as an APC member, Bankole told APC officials and his supporters who followed him there that, the registration marks his official defection to the All Progressives Congress and that, what people should for him is that, they should be praying for him concerning the next step he is going to take.

During the last general election that was conducted in 2019, Honourable Dimeji Bankole contested as the governorship candidate of the Action Democratic Party, before he lost to Dapo Abiodun.