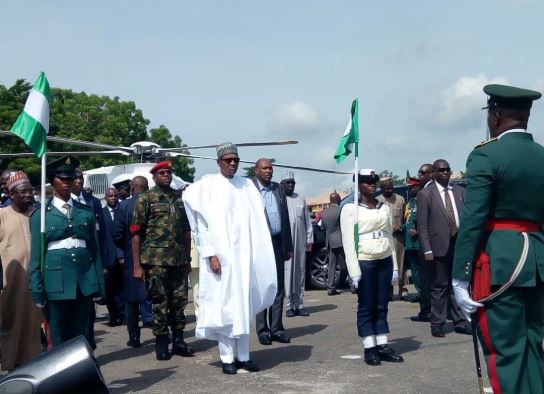 President Muhammadu Buhari last week trended on social media for his visit to Imo State despite the sit-at-home order by the Indigenous People of Biafra (IPOB).

As at the time of filing this report, President Muhammadu Buhari had reportedly paid working visits to 21 out of the 36 States since winning the election in 2015.

Here is a summary of the States Buhari has paid a working visit compiled by The Nation:

Borno – With respect to the security situation, the President paid series of working visits to Borno state.

Bauchi — President Buhari visited Bauchi and was received by former Governor Muhammed Abubakar where he commissioned Air Force Referral Hospital and flagged off the distribution of farming implements to farmers.

Ebonyi — On November 14, 2017 Buhari arrived Ebonyi State on an official visit, the first such trip since he took office in 2015.

Edo — Edo was the first South-South state the President visited on November 8, 2016 based on the invitation of former Governor Adams Oshiomhole to commission projects.

Jigawa — On May 14, 2018, Buhari arrived Dutse, Jigawa state capital on a two-day working visit. He was received by Abubakar Badaru of Jigawa and Abdullahi Ganduje of Kano to commission some projects.

Kaduna — Buhari visited Kaduna on January 5, 2018 where he commissioned 10 coaches and two locomotives and the Kaduna Inland Dry Port.

Kano – On July 5, 2021, President Buhari visited Kano on a working visit to perform the groundbreaking ceremony of the Kano-Kaduna segment of the Kano-Lagos railway modernisation project. He also commissioned some projects constructed by the Kano State Government.

Katsina — After spending some days in Kano, Buhari extended his visit to Katsina, his home state. He commissioned Zobe Regional Water Supply Project and Tsaskiya road in Safana.

Lagos — On the invitation of former Governor Akinwunmi Ambode, Buhari visited Lagos on April 24, 2019 to commission some projects, including the Institute of Maternal and Child Health (Ayinke House); Lagos Theatre; Oshodi Transport Interchange and International Airport Road as well as 820 Mass transit buses. Buhari had visited Lagos in May 2016 on a two-day working visit.

Nasarawa — The President on February 8, 2019 paid a one-day working visit to Nasarawa state. He commissioned Comprehensive Special School for Lafia, the Primary Healthcare Centre in Kwandere, and the Muhammadu Buhari International Market for Karu, among others.

Osun — President Buhari was on a one-day working visit to Osun on September 1, 2016 to commission some projects as part of the 25th anniversary of the creation of Osun State.

Plateau — On March 8, 2018 Buhari paid a two-day working visit to Jos, Plateau State where he commissioned some roads, including Mararaba Jama’a expressway, Low-cost Miango-Rafiki road network and the fly-over at Secretariat junction.

Taraba — Buhari visited Taraba State on March 5, 2018 to address the herders-farmers crisis which led to the displacement of many persons.

Imo – On Thursday, September 9, 2021, President Buhari made his first working visit to Imo state, since becoming president in 2015. He commissioned some projects in the State.