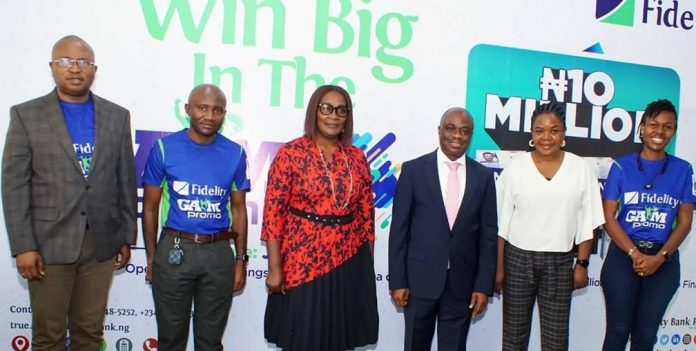 Fidelity Bank Plc on Thursday splashed N39 million on 15 customers in the final draw of its Get Alert In Millions (GAIM) Season 4 savings promo.

The cash prizes were in the categories of N10 million grand prize, N3 million, N2 million and N1 million, respectively.

The winners emerged through a transparent process witnessed by representatives of the National Lottery Commission and Federal Competition and Consumer Protection Commission.

Speaking at the final draw, the bank’s Managing Director, Mrs Nneka Onyeali-Ikpe, said the campaign was the ninth in the series of savings promos embarked upon by the bank in the  last 14 years.

She said the season 4, which commenced in October 2019, had so far conducted five draws but was suspended due to the outbreak of the COVID-19 pandemic.

She noted that the promo was suspended in March 2020 upon obtaining the necessary regulatory approval due to COVID-19.

“Based on the monthly and bi-monthly draws conducted, 81 winners had emerged; with a total of N63 million and several consolation prizes won,” she added.

Onyeali-Ikpe, who was represented by the bank’s Executive Director, Lagos &South West, Dr Ken Opara, said the bank had also given out airtime worth about N6 million to 7,000 customers in the promo.

“At this final draw, we shall give out total cash wins of N39 million to 15 customers and 18 consolation prizes of television sets, fridges, and generators.

“Upon conclusion of this draw, we would have given out N120 million in cash and 108 consolation prizes of television sets, fridges, and generators (worth N7.8 million) to 204 winners,” she said.

Onyeali-Ikpe noted that the promo was instituted to boost financial inclusion and to reward its teeming customers for their loyalty and patronage.

“The phrase ‘It pays to save with Fidelity Bank’ has become deeply entrenched in the minds of the people and this savings campaign will in no small measure aid the growth of that consciousness.

“This promo encourages customers and members of the public to imbibe a savings culture, thus deepening financial inclusion, in line with the mandates of the Central Bank of Nigeria,” she added.

She said the promo had impacted positively on the bank’s bottomline.

“The impact has been very phenomenal in major growth, a lot of people who didn’t have the opportunity to save now have.

According to her, the bank is perfecting arrangements for the next promo and the customers should be expectant.