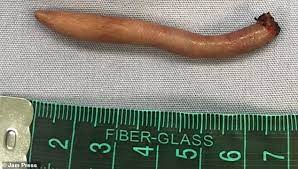 A girl in Mexico has been born with a tail, doctors have revealed.

The extremely rare phenomenon has been recorded fewer than 200 times.

The infant, who wasn’t identified, was born by a C-section at a hospital in Nuevo Leon. Her parents were healthy and in their late twenties.

Doctors quickly spotted a 5.7cm-long (2.2 inches) tail that was ‘soft’, ‘covered in skin and fine hair’ and had a ‘pointy’ tip.

Detailing the incident in the Journal of Paediatric Surgery Case Reports, doctors, led by Dr Josue Rueda, believe the case is the first ever recorded in Mexico.

The medics said the baby was born full-term and there were no complications during pregnancy.

Her parents already had a son who was healthy.

But shortly after she was delivered doctors quickly spotted the tail.

They said it was sticking out at the end of her tailbone with its base slightly to the left.

It varied between 3mm and 5mm in diameter, narrowing towards the ‘pointy’ tip.

The doctors wrote: ‘The structure was soft, covered in skin, and fine hair, it could be passively moved with no pain but showed no spontaneous movement.

‘The baby cried when the structure was pinched with a needle.’

Human tails are split into two categories. ‘Psudotails’ are growths that resemble a tail but are caused by spine problems or tumours.

Meanwhile, ‘true tails’ contain muscle, blood vessels and nerves but no bones — resembling those in animals.

It is thought to emerge from the embryonic tail that all babies develop in the womb, but is usually reabsorbed back into the body to form the tailbone.

Scans revealed that the tail was not a result of a spine problem, such as spinal dysraphism — a condition when the spin does not form properly and can cause a tail-like growth to appear at the bottom of the spine.

Doctors discharged the baby and reassessed her when she was two months old. She was a healthy weight and height and the tail had grown 0.8cm (0.3 inches).

Surgeons removed the tail in a minor operation that was performed under local anaesthetic.

The patient was discharged the same day and suffered no complications.

Further analysis of the tail revealed it contained soft tissue, arteries and veins and bundles of nerves.

The team noted that human ‘true tails’ are ‘extremely infrequent’, with just 195 cases identified by 2017, with the longest being 20cm (7.9 inches).

They are most often found in boys and one in 17 babies with tails also suffer brain or skull growth disorders.

They are generally not spotted until after a baby is born and doctors don’t know what causes them — with only one example of them running in families.

Human ancestors, alongside our ape relatives, lost our tails when we diverged from monkeys about 20 million years ago.

In some faiths and cultures, human tails are considered holy and are worshipped.