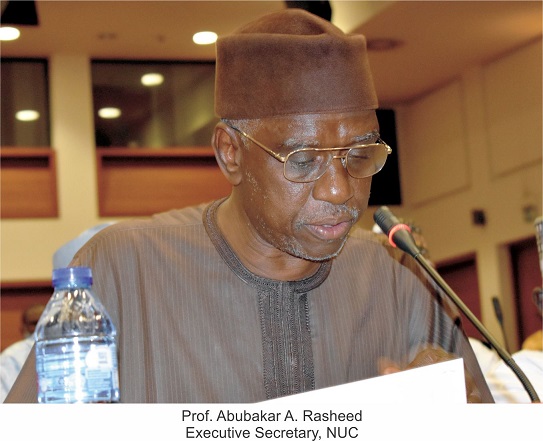 The National Universities Commission (NUC) has expressed confidence in the ability of the newly appointed Secretary-General of the 54-year-old Association of African Universities (AAU), Prof. Olusola Bandele Oyewole, to excel in office in the overall benefits of the universities in Africa.

Oyewole’s appointment was announced last month by the outgoing President of AAU, Professor Antonio Orlando Quilambo – the Rector of Eduardo Mondiane University, Mozambique – at the virtual extra-ordinary general conference of the association.

The new Secretary-General, who is the immediate past Vice-Chancellor of the Federal University of Agriculture, Abeokuta (FUNAAB) and who  will resume on October 1, 2021, is replacing an Ivorian scholar, Professor Etienne Ehouan Ehile – who served for nine years.  The AAU headquarters is in Accra, Ghana.

The NUC in a letter signed by its Executive Secretary, Professor Abubakar Adamu Rasheed, stated that with Oyewole’s wealth of experience “as a visionary leader, a seasoned administrator as well as a scholar of international repute,” his tenure would witness the much-needed reforms in higher education in Africa.

“I am confident that with your wealth of experience, you will succeed in taking Africa’s Higher Education portfolio, to enviable heights,” the Commission said, stressing that Oyewole’s appointment was in recognition of the professor of Food Science and Technology’s sterling qualities as a visionary leader, a seasoned administrator as well as a scholar of international repute.

The commission in the letter, NUC/ES/254/Vol.10/3 dated August 23, 2021 recently obtained by our correspondent, extolled the virtues of Oyewole and assured that the university community in Nigeria is fully ready to collaborate with the association.

The NUC said: “I have received with utmost pride and a deep sense of fulfilment, the good news of your recent appointment as the Secretary-General of the Association of African Universities (AAU).”

It added: “This appointment, I believe, has been made in recognition of your sterling qualities as a visionary leader, a seasoned administrator as well as a scholar of international repute.  This is also an indication that your huge contributions to the development of University education in Nigeria and the African continent, have not been in vain.

“We recall that as a scholar of distinction, you have satisfied various secondary and primary leadership function positions rising to the pinnacle of your career.  Your antecedents as a former Vice Chancellor of the Federal University of Agriculture, Abeokuta, a Professor of Food Science & Technology and as a Senior Expert in Higher Education (having worked for the African Union Commission and the Association of African Universities), have therefore, placed you on a solid pedestal to spearhead the much-needed reforms in order to surmount the challenges confronting African Higher Education.”

Apparently impressed by Oyewole’s credentials as a one-time President of the AAU, the Commission said that it wished him a “resounding success.”

It further stressed: “Let me also re-assure you of the unwavering commitment of the Commission in partnering with the Association in those cross-cutting areas that would be mutually beneficial to both the NUC in particular, and the NUS in general.”

However, Oyewole, who specialised in Food Microbiology and Biotechnology, had at the virtual meeting commended the association’s Governing Board on the confidence expressed in him to serve.

He declared: “My vision is to amplify the relevance of the Association of African Universities as the voice of higher education in Africa.”

“Without strong partnerships and collaborations, the Association would be unable to achieve her grand mission of improving the quality of African higher education,” Oyewole said, while emphasising: “Through honest, sincere, visionary, committed, transparent and disciplined leadership, I intend to build new strategic partnership and revive old partnerships for the sustainability of the Association.”