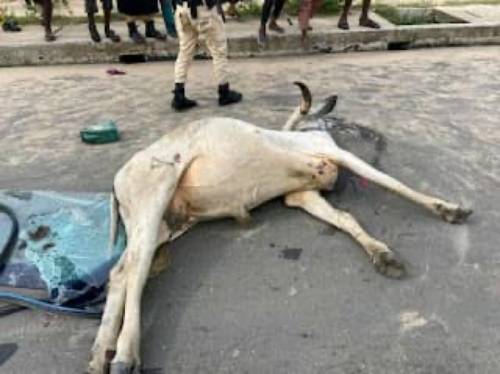 Two herdsmen have stabbed a commercial bus conductor to death for knocking down and killing one of their cows.

It was gathered that the driver had lost control, causing his bus to hit and kill one cow belonging to the suspected herdsmen at Agogo Igbala near Mowo on Monday.

A Twitter user, @Austynzogs, who disclosed this, also posted pictures on his verified handle.

He tweeted, “12h35: Civil disturbances at Agogo Igbala near Mowo, along Lagos/Badagry expressway, after a driver lost control and used his bus to hit & kill two cows belongings to a herder.

“The angry herder allegedly stabbed both the driver and conductor to death.”

Videos posted by the Twitter user show people gathered around the bodies of the deceased driver and cows.

Although the Twitter user alleged that two persons and two cows were killed, the second person allegedly killed as well as the second cow did not feature in the videos.

READ ALSO: Tinubu may not have certificate but has wisdom to rule – APC chieftain blasts critics

The front of the Lagos bus painted yellow and black is dented with some flesh of the dead cattle stuck to the grille of the vehicle.

Confirming the incident, the  Lagos State Police Command PPRO, SP Benjamin Hundeyin,  said, “A commercial vehicle ran into two cows this morning at Agemowo, Badagry, killing one of the cows. The two cattle herders attacked someone they mistook for the vehicle conductor, resulting in his death. Angry residents blocked the highway in protest of the killing.

“The DPO, Morogbo Division, assisted by soldiers from 243 Recce Battalion, Badagry successfully cleared the obstruction. Normalcy has since returned to the area. It is entirely false that the victim was turned back when he sought refuge in the police station.

“He did not make it off the accident scene, let alone reach the station. Meanwhile, the two herders have been arrested.

“An investigation is ongoing. Updates will be provided subsequently.”