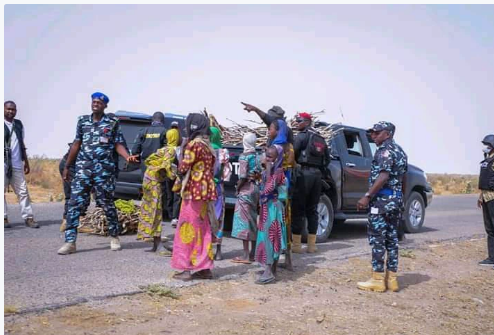 The internet is buzzing with news of a state governor who halted his convoy, at the sight of some women returning back home from fetching firewood. According to Northeast reporters, the governor was in his convoy heading back to the state capital, when he saw the young women with the firewoods on their heads. He halted all the cars in the convoy and ordered everyone down.

Asking them where they were heading, he decided to give the young women a lift in his official vehicles, while the woods which the women were carrying were loaded into another truck, as the excited women were conveyed back home.

The governor of the state known as Zulum has in time past been found to involve in similar cases for his citizens. Not minding the dangers associated with alighting from his convoy, he did so anyway. Recall that governor Zulum has been attacked by Boko Haram terrorist severally, with him escaping just by the whiskers. However, the governor who is known to have a soft spot for his people, risked his life to come down from his security vehicle to accommodate the women he barely knew.