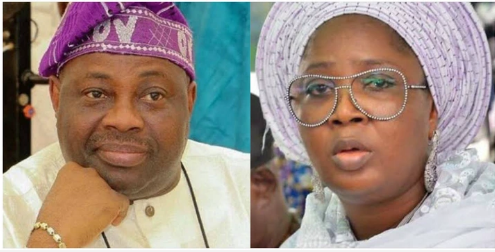 Following allegations that the daughter of the former Governor of Lagos State, Folashade is nothing less than 60 years old, a former presidential candidate of Nigeria, Dele Momodu, has come to defend Folashade.

According to Dele Momodu, it is absurd for someone to suggest that Tinubu’s daughter, Folashade is up to 60 years old.

Dele Momodu revealed that he is a very close friend to Folashade and her husband, Honourable Oye Ojo. He noted that it is absurd to say that Tinubu’s daughter, Folashade, is 60 years old.

The rumours of Folashade being up to 60 years old was a reaction to a news report which revealed that Tinubu is in his late 60’s. Some people made wild allegations that Tinubu can’t be in his 60’s.

READ ALSO:  Chioma deletes all pictures of Davido from her Instagram page

They also claimed that Tinubu’s daughter Folashade is already 60 years and as such, Tinubu can’t be in his late 60’s. In response to the wild accusations which claimed that Folashade is 60 years old, Dele Momodu who is a family friend to Folashade and her husband, Honourable Oye Ojo, said that there is no way Folashade can be up to 60 years old.

He added that the claims that Folashade is 60 years old is a result of people indulging in unproductive conversations.

Dele also said that people can still practice politics and disagree without all this venom and vituperation. Dele Momodu uploaded a picture of Folashade and her husband, Oye Ojo, as he tried to prove that there is no way the woman in the pictures can be 60 years old. Dele Momodu is of the opinion that people should focus more on having meaningful conversations instead of engaging in unproductive conversations.

Below is a screenshot of Dele Momodu’s tweet which defended Folashade: