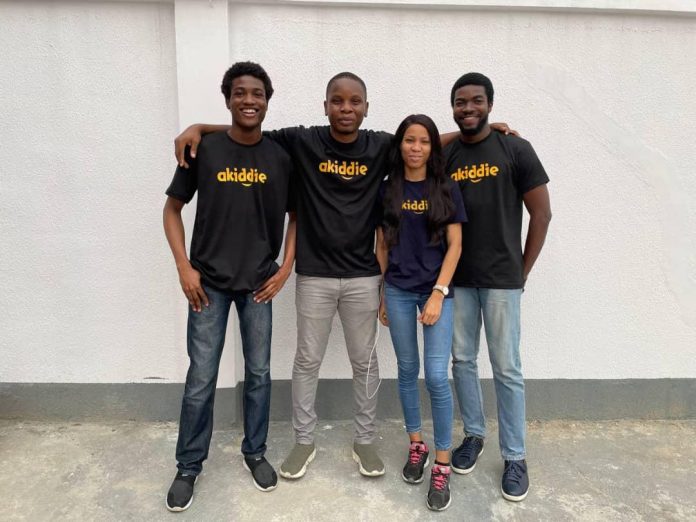 As Nigeria continues to tackle the menace of unemployment, some intelligent and tech savvy youths are  building a Mobile Application called Akiddie, a platform which enables African creators of children content sell their contents to buyers from across the world.
The mobile app, according to the teams spokesperson and techpreneur, Dominic Dominic, is the brain child of himself, Fanan Dala, Tolulope Wojuola, and Osafuwenko Tunde-Oni, all graduates of Covenant University, Ota, Ogun State.
Dominic said the idea of the App was muted as far back as when they were all students in the University about two years ago.Today, what began as a mustard seed has ended up becoming a brand that is financially empowering thousands of young content creators.

Akiddie basically allows any person who is creative enough to produce children content to easily monetize it.
With the platform, they can sell to anyone literally anywhere in the world and have their monies remitted to their account in Nigeria.
Describing the platform and how it works, Dominic explains that “Akiddie is a digital content marketplace that allows creators to upload and sell their children’s content, either one off or on subscription basis.
“It currently supports content in text, audio and video. The type of content it supports also varies, ranging from audio visual learning aids that cover the entire primary school curriculum to videos that teach etiquette and DIY skills, to entertaining stories,” he noted.
According to him, the platform started as a subscription based digital library of African children’s books. But in December 2020, it pivoted to a new model.
“We moved to this model from a subscription library model where we created all the content primarily because we got loads of emails after our CNN feature asking us to replicate the model we created for African children for other minorities.
“However, from further research, we discovered that the main reason why there wasn’t a lot of minority children’s content was because it was difficult to monetize. Aggregating platforms like Youtube for kids pay on ad revenue and to earn a significant amount of money to cover costs from ad revenue, your content has to appeal to the majority of people.”
Sighting an instance, he said a story about the three little pigs on Youtube can garner millions of views on Youtube  because it appeals to majority audience, while a story about Sango or an African folktale would struggle to crack a million views. To solve this problem, they decided to pivot to a system that allowed for multiple minorities to sell to their communities on Akiddie and make a lot of money doing so.
Explaining how Nigrians creators can sell their content, Dominic said,  “Currently, the way Akiddie is set up makes it incredibly easy for Nigerians to create and monetize their children’s content. This would allow a lot of people in Nigeria to create and sell their children’s content world-wide.
“Although our primary target audience are parents of children in diaspora communities that would pay a premium for content that culturally affirms their children.
While they may have a lot of free children’s content available, culturally affirmative content may not be so readily available. We are also confident that parents would pay for the audio visual learning aides and other content that teach children non curriculum based skills.”
To access the App, users can download the app on the android or IOS play store. Creators can sign up on the website, upload their content and start selling.
He explained that a good way of telling African stories to a global audience is to make consistent effort in encouraging and patronizing creative works of content creators working on Akiddie.