Home Education Edu-News How Kidnappers Freed A University Student Because Of the Shirt He was...
EducationEdu-News 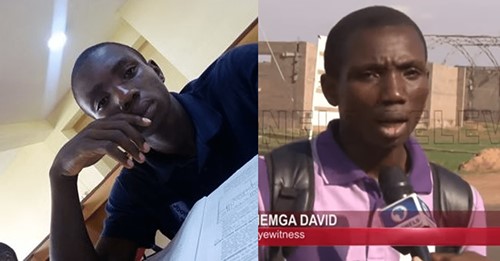 Sad news came out of the College of Engineering at the University of Agriculture in Makurdi when it was reported that four students were abducted from the college last Saturday night. Since then activity on the campus has greatly reduced. One of the cars of the abducted student still remains parked on the campus and hasn’t been touched since the day of the incident.

While journalists have tried to get students of the university to comment on the things that happened on that day, a lot of students have opted to not answer questions out of fear and because they do not want to put any targets on their back.

However, one student found by Channels Television, Memga David, finally decided to speak on the events that transpired that day and give us an insight into what happened – as well as how one university student was freed because of the shirt he was wearing.

We discovered a car was parked outside. The car was actually empty so we realized they took two students from the car and other students which followed them and they passed through the bush.

When we came out there was also a girl who managed to escape. She came out, she was shivering, she wasn’t able to talk very well. So they were able to go with about three to four or five persons but we cannot say specifically but one of the students is from engineering and is a well known person.

There was a guy that they drove him back because he was wearing a white shirt. They said the white shirt can identify them easily because of the luminosity from the moon as of that time.

Apparently, according to ScienceBuddies.org, it is true. Wearing garments that stand out with respect to the background (positive contrast), increase the chances of being seen compared to wearing garments that blend in with the background (negative contrast). So what that means is that when you wear a white garment in a dark place, it is easier for you to stand out and be found as opposed to if you wear a dark garment in a dark place. It’s obvious information on the surface level but information that can save you from very horrible situations.