How my mother died – Chimamanda Adichie 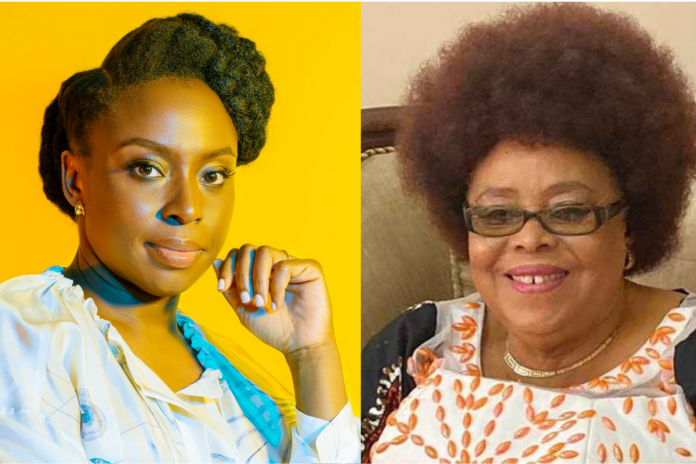 Award-winning Nigerian writer, Chimamanda Ngozi Adichie, has penned an emotional eulogy for her mum, Grace Adichie, who passed on recently.

Narrating how her mother died on her Instagram handle, she said Mrs Adichie, who was the first-ever female registrar of the University of Nigeria, had gone to work at ASUBEB in Awka on February 26, but her assistant said she looked a bit tired.

“How does a heartbreak twice? To still be immersed in grief, barely breathing again, and then to be plunged callously back into a sorrow you cannot even articulate,” she wrote.

“How can my mother be gone forever, and so soon after my father? My warm, loving, funny, kind, quick-witted, beautiful mother. Unconditional supporter and cheerleader of her children, fun and funny, source of delicious sarcasm, style icon, so sharply observant she never missed a thing.”

“On Saturday, she spent time in Louisa’s shop, outside the gate of our house in Abba, watching the cars and people on the dusty road. On Sunday, her driver drove her to Mass. Sunday evening she was unwell. She was taken to a private hospital in Awka.”

She revealed that two hours after arriving at the teaching hospital where she was later transferred to, she passed on.

Mrs Adichie, who was also a permanent board member at Anambra State Basic Education Board (ASUBEB), is survived by her six children: Ijeoma, Uchenna, Chuks, Okechukwu, Chimamanda, and Kenechukwu; as well as nine grandchildren, in-laws, and many relatives.

Ms Adichie’s father, James Nwoye Adichie, a professor, died on June 10, 2020. Early this year, she revealed she planned to publish a memoir about her father’s death.