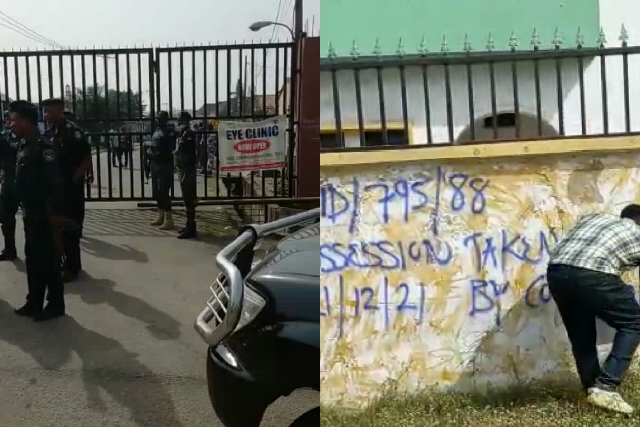 Hundreds of Magodo residents have been stranded as they were locked out of their estate by policemen who escorted landowners to enforce the Supreme Court’s judgement after 38 years of dispute.

Stern-looking policemen took over the area in Mogodo to execute a Supreme Court judgement which had mandated the Lagos State Government to give back 549 plots of land it had fraudulently acquired over 38 years to them.

The Lagos State government under the military had fraudulently taken over the plots of land from the original owners in Shangisha under the guise it was planning to build an international standard hospital there.

But it reneged on the promise and started allocating the lands to government officials and their cronies. That piece of land in what is today known as the high-brow Magodo area in Lagos State.

The landlords had been seeking justice for the past 38 years even when the Supreme Court had six years ago given them judgement and ordered the Lagos State government to vacate the lands.

Panic gripped landlords and residents as anti-riot policemen were on strategic area, as more than one thousand youths apparently recruited by the Shangisha Landlords Association moved from one house to the other, marking them for possession.

Their inscription on each house indicated that the court had given them possession of the land on which the houses were built.

It could be recalled that the military government of the state had acquired the area for public use but later sold the land to government officials and their cronies, the situation which made the original owners through Shangisha landlords Association to approach the high court for redress.

“Between 1984 and 1986, the government of Lagos State of Nigeria fraudulently took the parcel of land belonging to us, members of the landlord Association of Shangisha /Magodo the area occupied by us, under the pretense that the acquired land will be used for the construction of an international standard hospital. We the landlords were forcefully evicted from the land in dispute.

“The government went ahead to pull down all our houses, taking the entire area which was not what they had asked for in the 1st place. After the pulling down of our houses, we were embarrassed to find out that the Lagos state government officials involved had converted the land for their selfish interest, allotting the said land in plots to their friends and cronies, and some of the high and mighty people in the society

“The Association (Judgement Creditors) unanimously elected Chief Adebayo Adeyiga as their chairman and six other members to represent the Association in the recovery of their land from the Lagos State government.

“We approach the Lagos State government, armed with facts of the fraudulent allotment, and it was resolved between us that members of the Association would be given plots of land from the then-new scheme known as Magodo scheme 2,” Chief Adebayo Adeyiga, Chairman, Shangisha Landlord Association, said in a chat with newsmen.

“It was when they failed to do so, that we were forced to sue the Lagos State government sometimes in June 1988 in suits ID/795/88 Chief Adebayo Adeyiga and six (6) others versus military governor of Lagos State and four(4) others in Lagos State high court, Ikeja.”

The court then ruled that both parties should maintain the status quo in the area, that is both parties should vacate the land until the final determination of the case. But in disregard of the court order, the state government continued to sell the land. The high court eventually, in its final judgment, ordered the state government to give the Association and its members 549 plots of land as a matter of first priority.

Dissatisfied with the high court judgment, the government approached the appeal court, which affirmed the judgment of the lower court on the matter and ordered that Lagos state should as a matter of first priority give back 549 plots of land the original landowners in the Association of Shangisha landlords.

The police stormed the area at about 2.30 pm on Tuesday to maintain law and order while marking of the houses supervised by a court bailiff was ongoing. As at the time of this report, confusion and panic pervaded the whole area.

Many of the landlords, who presently occupy the acquired property said they bought their land from the Lagos State government, adding that they were not aware of litigation on the land when they bought the land for which they were given a certificate of occupancy.

However, Adegiya, speaking on behalf of the original owners of the land, said they had by all by means done and exhausted what was expected of law-abiding citizens of the nation by following due process in this matter, but that the government of Lagos State had not deemed it necessary to obey court orders.