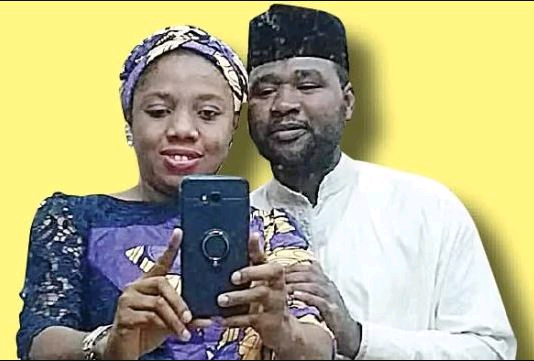 According to a report by The PUNCH, Amina, wife of the Nigerian atheist, Mubarak Bala, jailed for 24 years for blasphemy has said she has not been able to eat or sleep since her husband was sent to prison.

Bala, a 37-year-old President of the Humanist Association of Nigeria, was jailed on Tuesday (April 6) by a High Court in Kano after pleading guilty to all 18 charges and asking for leniency.

He has been in detention since 2020 after a group of Muslims filed a petition to the authorities accusing Bala of posting uncomplimentary messages about Islam and the Prophet Mohammed on Social Media.

In an interview with one of our correspondents, the 37-year-old civil servant said she has been scared ‘to her bones’ since she learnt of the judgment.

“I see my husband (Mubarak) whenever I close my eyes. I cannot sleep. I cannot eat. It still seems like a nightmare to me. I have no choice but to be strong. I feel bad not being with my husband for long. My son is growing up without seeing his dad. The mental torture is just too much for me.

“We got married in August 2019. We did not even celebrate our 1st anniversary when it happened. My son was just six weeks when my husband was whisked away. I was in Abuja to have our baby when one of his friends called me to that the police took him away for a post he made on Facebook about Prophet Mohammed and Islam. I was confused. I am still confused as I speak to you.

READ ALSO: Accident Should Not Deter You From Serving As Peace Ambassador — Buhari Tells Jonathan

“For eight months after he was ‘kidnapped’, we didn’t know where he was until we learnt he had been transferred to Kano detention facility. His parents are sad about it. I am from Kogi State. My son is just two years old. Whenever I show him his dad’s picture, I would have to tell him to call him ‘daddy’. He does not understand what is going on. It has been traumatising for me, but I have to be strong for my son and my darling husband,” she said.

Amina also noted that they would appeal the judgment by the High Court, and would pursue it to the Supreme Court.

She said, “The owner of Facebook should be aware of this crime. He should know that someone was arrested because of his platform and jailed for 24 years. The government is aware. They just pretend as if they do not know about it.

“We will appeal the case. I don’t accept that judgment against my husband. We will pursue it to the Supreme Court.