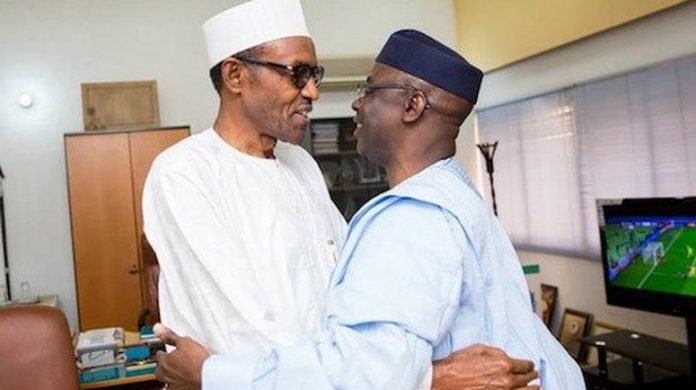 Tunde Bakare, the senior pastor of Citadel Global Community Church, has revealed that his passionate support for President Muhammadu Buhari was based on a divine revelation.

According to Bakare, God told him that Buhari has a role in stabilising Nigeria.
The pastor, who is also a seasoned politician, made this statement in a State of the Nation Broadcast on Sunday.

Bakare has been an ardent critic of the nation’s past leaders and is also quoted to have once said that he is under no obligation to protest against the sitting president.

While retelling his role in the coalition of political parties which led to the creation of the All Progressive Congress and the eventual emergence of  Buhari in 2015, Mr Bakare said God had in a vision shown him that Mr Buhari has a critical role in the stabilisation of Nigeria.

“After the controversial and divisive 2011 elections, as Nigeria drifted along sectional undercurrents and the nation sought a unifying force, some of us prevailed on General Muhammadu Buhari not to quit the stage but to take back his words and form a coalition of the best of the North and the best of the South to salvage our nation,” Mr Bakare said.

“I must admit that I played a critical role in that mission. God had shown me in a vision that GMB still had a role to play in stabilising Nigeria.”

Since assuming power in 2015, however, the country has seemed to be even further divided than before. The security situation in the country has progressively deteriorated, reaching a crescendo in late 2020 and early 2021 where multiple school kidnappings and sectarian attacks have been reported.

The president has been also often been accused of prioritising issues concerning his Northern Fulani ethnic group, particularly the nomadic herdsmen, to the detriment of other tribes.

The recent rift between the various ethnic groups has been further wedged in, as renewed agitations among self-determination groups have called for secession.

Recently, popular Yoruba activist Sunday “Igboho” Adeyemo called for the creation of the Oduduwa Republic and even went as far as to say that the Yoruba-speaking groups have withdrawn from the country.

Bakare also lamented the recent spate of killings in the nation, saying that security governance has been “superficial” and “inadequate.”

“Years after the government assured Nigerians that Boko Haram had been “technically defeated,” we are once again confronted with entire villages being overrun,” he said.

“While I commend the bravery of our armed forces, the worsening security situation is an indication that our approach to security governance is simply superficial and inadequate to deal with the root causes of the problem.”

The cleric also said that restructuring the government system is intended for the prosperity of the nation as a whole, terming any individual that is against this as an “enemy of Nigeria”.