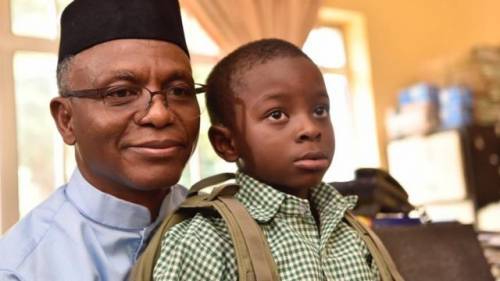 Kaduna State Governor, Nasir El-Rufai, has secretly withdrawn his seven-year-old son, Abubakar El-Rufai, who was enrolled in 2019 at the Kaduna Capital School, from school, SaharaReporters  reports.

Abubakar is said to have been absent from school for several weeks till now, according to findings by the online newspaper.

It was learnt that the boy’s absence from school is strongly linked to the rising abduction of schoolchildren in  northern Nigerian schools by  bandits.

A visit to the school premises on Monday showed that young El-Rufai had not come to school since resumption of first term , amidst the rising insecurity and threats to the lives of schoolchildren.

The governor had on September 23, 2019,  enrolled his son in the school as a commitment to improving the quality  of education in public schools in the state.

Abubakar is in Basic 2B at the Kaduna Capital School – a class of about 50 pupils before COVID-19 pandemic struck last year.

SaharaReporters  correspondent, who arrived at the school around 10am, did not see Abubakar till the school closed by 1pm and pupils started trooping home.

The newspaper  also noticed some security lapses in the school, located on Isa Kaita Road, Ungwan Sarki area of the state, which might  have contributed to the reasons why the young boy was no longer regarded to be safe on the premises.

Meanwhile, some pupils and two teachers, who spoke with SaharaReporters, confirmed that the young El-Rufai had been absent from school since resumption.

“He does not come again. I have not seen him. I don’t know if he is still a pupil,” one of the pupils stated.

“His class is in this two-storey building, which is for the primary school. But he has not come since we resumed,” another pupil noted.

“You know the security situation around public schools in the state; he may have been withdrawn by his parents to prevent any embarrassing situation of abductions or bandits’ attacks,” a teacher noted.

“His parents may have enrolled him in another school or who knows, he may still be back, perhaps after the schools are safer. The governor has a strong stance against bandits – he is not willing to be seen to be paying ransom. So he would have assessed the situation and concluded that he has to protect his son from any occurrence,” another teacher stated.

El-Rufai’s wife, Hadiza, on Monday insinuated that her husband had told her that if she ever got kidnapped, he would not pay ransom to secure her release.

On her Twitter handle, Hadiza Isma El-Rufai (@hadizel), said, using asterisks in place of what is believed to kidnapping and ransom, “At my farm today. Anyone thinking of ********** me should not bother. The man has already warned me that he will not pay any ******.”