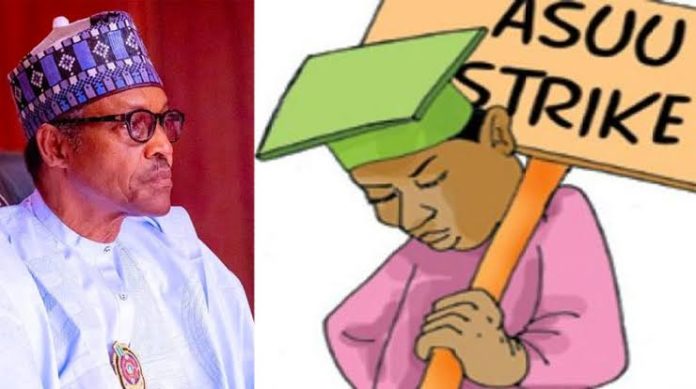 Federal Government has revealed that the Academic Staff Union of Universities (ASUU) will end its ongoing strike soon.

The Minister of Labour and Employment, Senator Chris Ngige, made this known in an interview with newsmen on Wednesday.

FG gave the assurance on Wednesday, that its face-off with the university-based unions will soon be resolved and academic activities resume in earnest.

READ ALSO: Why Nigeria Has Not Removed Fuel Subsidy – Buhari

The Federal Government has also denied the allegation that it was planning to create a different payment table for the Academic Staff Union of Universities, ASUU.

This is as the government has summoned all the relevant agencies including the National Information Development Agency, NITDA to brief it on the success so far recorded in resolving the contentious issues that led to the ongoing strike by the four university-based unions.

Recall that the public universities were shut down on February 14 by the ASUU and the other three university-based unions, the Senior Staff Association of Nigerian Universities, SSANU, the Non-Academic Staff Union of Education and Associated Institutions, NASU, and the National Association of Academic Technologists, NAAT, joined in the strike over the inability of the government to address their concerns.

Fielding questions from State House correspondents at the end of the Federal Executive Council, FEC, meeting presided over by President Muhammadu Buhari at the Council Chamber, presidential villa, Abuja, the Minister of Labour and Employment, Senator Chris Ngige said the government was interested in seeing the students going back to school.

The Minister said that the meeting on Thursday is expected to look at the progress report by the relevant bodies handling the crisis including NITDA on how far it has gone with the integrity test on the University Transparency and Accountability System, UTAS which was proposed as an alternative platform by ASUU and the University Peculiar Personnel and Payroll System, U3PS, proposed by SSANU and NASU.

Ngige said he was waiting for the report of the Tripartite Plus Committee comprising the Ministry of Education, the Chief of Staff, Salaries and Wages Income Commission, the National Universities Commission, NUC as well as the striking unions.

On the allegation that the federal government was planning to create a separate salary payment structure for the ASUU, the Minister said there was no veracity in such allegation.