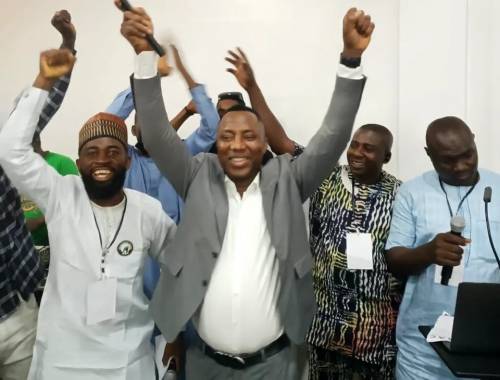 Publisher of Sahara Reporters, Omoyele Sowore has been declared the presidential candidate of the African Action Congress (AAC) for the 2023 general elections.

Sowore was declared the winner unopposed at the party’s national convention held at Work and Connect Event Center in Abuja on Thursday, which was monitored by officials of the Independent National Electoral Commission (INEC). The event was attended by members of the party across the country.

Earlier, Sowore stepped down as the Chairman of the party.

Sowore, who made this known during the party’s convention, noted that the process of stabilising the party would commence before the convention to elect another chairman.

Sowore affirmed that other parties have elected their own “thieves”, stressing AAC must elect its own “police”.

An Appeal Court sitting in Abuja had affirmed Sowore as the substantive Chairman of the AAC last Thursday.