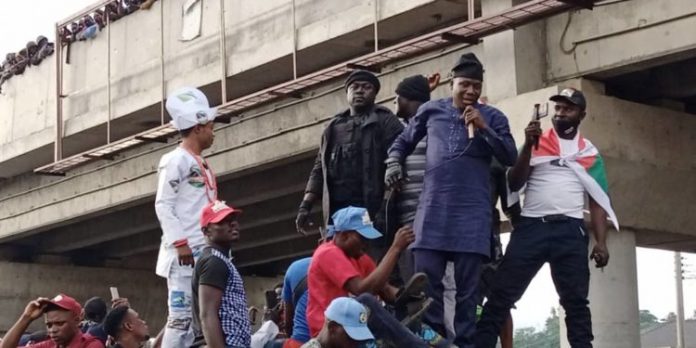 Popular Oduduwa Republic agitator, Chief Sunday Adeyemo also known as Sunday Igboho stormed Ekiti state on Saturday in continuation of the rally for the creation of the Yoruba nation, saying the 2023 general elections would not hold in the South West region.

Igboho who arrived Ado-Ekiti, the Ekiti State capital around 5:02pm was received by thousands of residents and agitators who had gathered for the event since around 8am.

The rally organised by the Professor Banji Akintoye-led Ilana Omo Oodua, the umbrella body of Yoruba Self Determination Group, paralysed social and commercial activities in the state capital with the popular Fajuyi park, Bank road, Ojumose , Okeiyinmi all blocked for the peaceful demonstration.

Addressing the enthusiastic crowd, Igboho lamented the suffering of Yoruba people in the hands of criminal Fulani herdsmen, saying all hands must be on deck to achieve the desired aim of secession.

He declared that the 2023 general elections would not hold in the region unless the Oduduwa republic is created, calling on all stakeholders to support him and other leaders in achieving it.