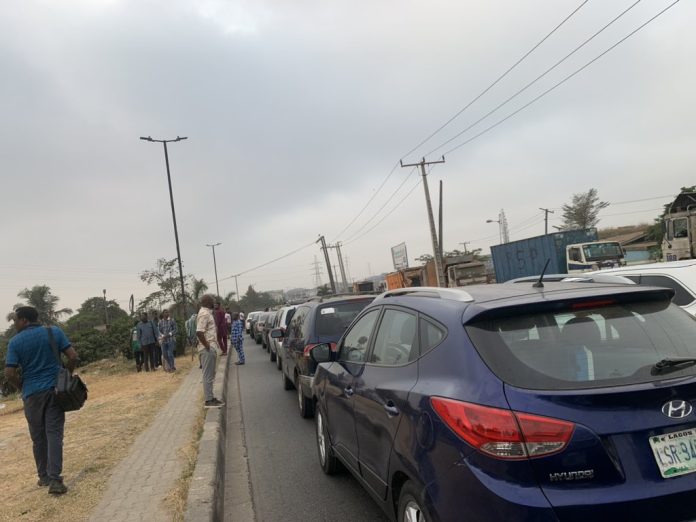 There was pandemonium in the Ojota area of Lagos on Monday as personnel of the Nigeria Police Force reportedly killed two people during the Yoruba Nation agitators’ rally.
A Twitter user, YorubaGlobalYouth, shared a picture of a lifeless man and a video reportedly captured during the riot.
The user captioned the multimedia elements as follows: “BREAKING NEWS! TWO PEOPLE HAVE BEEN REPORTED KILLED BY THE NIGERIAN POLICE AT THE YORUBA NATION OJOTA PEACEFUL MEGA RALLY TODAY 9TH JANUARY, 2023. IT WAS MEANT TO BE PEACEFUL!!!”
Another user, Dami Adenuga also described the area as unsafe due to the clash between the police and some people he termed as members of the Oodua People Congress (OPC).
He said, “Ojota is currently unsafe as a shootout is ongoing between the Police and members of the OPC. Please retweet for others to be aware, may we not start 2023 with tragedy abeg .”
“Ojota currently unsafe… shooting between police and OPC guys @giditraffic,” another user, Oyindamola, said.
“I witnessed the shooting and narrowly escaped with my colleague now,” she added.
Also, GoldMyneTv further revealed that several vehicles were burnt during the clash.
“Ongoing Civil unrest around Ojota, Lagos. Multiple gunshots, vehicles burnt as people scampered for safety. @rrslagos767 mobilized to restore calm. Kindly avoid area for now,” the user added.
When contacted for his reaction to the incident, the Lagos State Police Public Relations Officer, Benjamin Hundeyin, said peace has been restored at the scene of the incident.
However, he said he could not give any details yet.
- Advertisement -