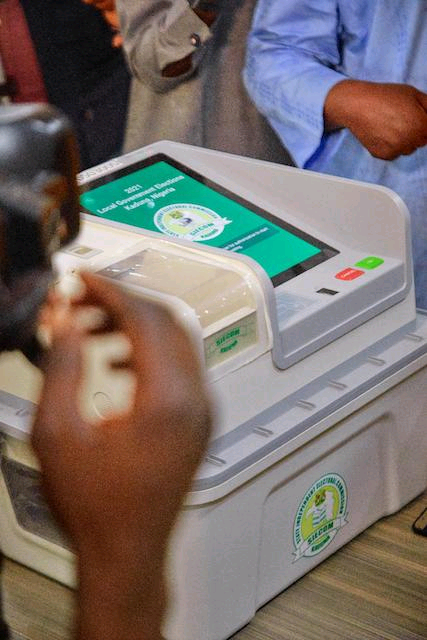 Kaduna State will use electronic voting machines for its local government elections which hold today, Saturday, 4 September in all the 23 local councils.

It’s a remarkable feat as the same technology was rejected by the National Assembly recently.

In 2018, Kaduna also used electronic voting to conduct its council polls, becoming the first state to do so in Nigeria and the second in Africa, after Namibia.

She stated that KADSIECOM therefore acquired electronic voting machines which were successfully used in 2018.

“Why that happened was because the Governor of this State, Malam Nasir Ahmad El-Rufai, being very progressive and courageous, decided when we came on board to task us with the responsibility of deploying technology to our Local Government Councils election.

“Initially, we thought all he meant was using the smart card reader because it had been such a success in the 2015 elections. But he said no, he wanted us to go the whole hog and have citizens actually vote on a machine and so we set out to develop the voting machine which we eventually presented to the public in 2018.”

The chairman disclosed that the state electoral body has put lessons learnt in 2018 into its preparations for the 2021 LG elections.

Briefing journalists, Dr. Dikko-Audu explained that the electronic voting machines used in 2018 have been upgraded to prevent multiple voting while preserving speed of voting and the integrity of the voting process.

“Each voter’s card can only be used once, so the machine will not allow multiple voting. The voter is required to touch the logo of the party he wants to vote for, and that choice is registered, and he can see a paper trail generated through a transparent window in the machine showing the party the voter chose.

“This paper trail can be tallied to compare it to the electronic result if any party agent at the polling unit so requests”.

Dr. Dikko-Audu confirmed that the results will be sent directly from the electronic voting machines to the KADSIECOM servers, while party agents and security agencies at the polling units will have card copies of the summary of results printed from the machine.

At the conclusion of voting, the result from each electronic voting machine is printed in ten copies so that the party agents at the polling unit will have a copy each.

“The security agents at the polling unit will also have copies and the result is transmitted to our server here in Kaduna. It is also stored in the USB port of the machine.

“You have four levels where the result is stored: the paper trail, the summary of results, the memory of the machine itself and the transmission to the server at headquarters. It will be hard for anyone to say they want to rig an election and change all those four values.

“Remember that I said we print ten copies of the summary of results, so ten people already have the results out there. How are you going to get all ten and change them? It will be very difficult.”

She noted that 95% of residents of Kaduna State who voted in the 2018 elections said that they found it easy to use the electronic voting machines during the local government elections of 12 May 2018, and she is confident that the ease of usage has been retained in the upgrade.