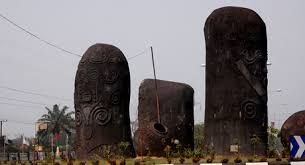 A young man who claimed to be 24 years old, Christian Edem Eyo, alias Etebong of No 7 Inyang Street has beheaded his aunt.

An eyewitness said the incident occurred in the early hours of Wednesday at about 5 am when the deceased left her apartment to use the bathroom.

A wíthness, Grace Edem said it was a worshipper in a nearby church, having an all-night prayer session who noticed when Christian was burying a headless body.

She said Christian took the head of the deceased into his apartment before the church members raised alarm and invited a local vigilante group.

“Upon the arrival of the police team, Christian, the suspect, allegedly confronted them and macheted one personnel before he was overpowered and taken away.”

The fresh head of the woman was seen inside the darkroom close to many mystical items such as candles, flowers, oils and other fetish items.

Also found in his room were two graves and a deep hole.

While confessing before newsmen, Christian said he killed the woman because she tried to seduce him and that the deep hole in his room is where his powers come from.

“I am 24 years old. I work as a bouncer at 125 Old Ikang Road Calabar. The woman wanted to seduce me.

“The deep hole you saw inside my apartment is an empowerment area. That’s where I empower myself.”

When youth leaders approached the father of the suspect, simply identified as Ete Etebong who lives on Waddel Street, he dismissed them, saying his son killed his aunt and that he will soon be released from detention at Mbukpa police station.

Police PRO Irene Ugbo said she was yet to be briefed on the matter.