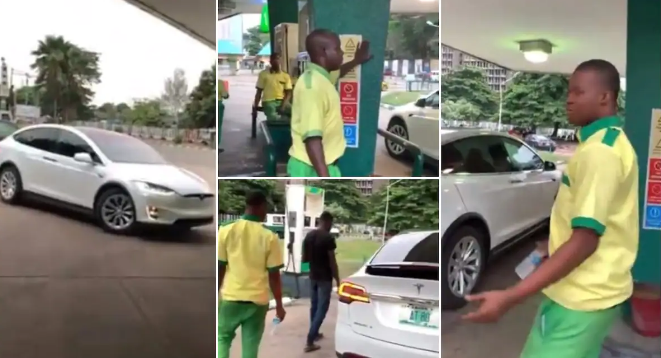 A man and his friend caused a big scene in Lagos state and it was an interesting drama to behold. In a video that has since become sensational content online, he drove a Tesla to a petrol station.

Before the car was driven into the station, the man already anticipated how funny the reactions of the people around would be.

At the pump, the attendant kept asking the man to re-park so that his tank opening would face the dispenser.

After checking both sides to no avail, a voice in the video in Yoruba wondered whether the tank is beneath the vehicle.

READ ALSO:  “I Have Children I Take Care Of”- Rita Dominic

When the man told the fuel attendant to sell him fuel, he asked “where is the tank?”.

In response, the man said: “Why won’t a car have a tank?” After much travail, the man revealed that the car is an electric automobile and does not have any need for fuel.