Many Killed, Others Injured As Troops Battle Boko Haram, ISWAP In Borno 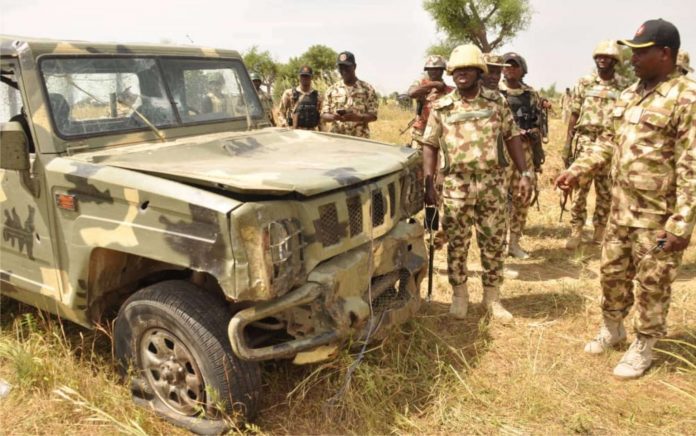 A fierce battle between troops of the Nigerian Army and fighters of the Boko Haram/ISWAP terrorist group has resulted in the death of many insurgents.

The encounter which took place at Bula Yobe axis of Banki in Bama Local Government Area of Borno State occurred after the terrorists attempted to attack a military formation in the area.

They however met stiff resistance from troops of 21 Armoured Brigade Bama of Operation Hadin Kai, resulting in a heavy gunfight that lasted more than two hours.

Unfortunately, two personnel of the troops lost their lives during the encounter.

Speaking on the incident, an intelligence officer told PR Nigeria that “the ISWAP-Boko Haram terrorists, suspected to have come from the Sambisa Forest, on about six gun trucks and approached the area from different directions simultaneously to wreak havoc, but met their Waterloo by the gallant troops.

“The terrorists withdrew in disarray with a large number of them suffering fatal injuries leaving behind several weapons and ammunition including anti-aircraft gun barrel, AK 47 rifles.

“Unfortunately, we lost two gallant military personnel while the fleeing remnant of terrorists after the encounter.”

The acting Director, Defence Media Operations, Brig-Gen Benard Onyeuko, disclosed this to reporters on Thursday during an update of the military’s operations across the country between June 18-30, 2021.

The military spokesman said the operations yielded attendant successes in the various theatres across the country.

He said the troops conducted ambush operations, clearance operations as well as responded to distress calls, repelled terrorist attacks on troops’ locations and dominated the theatre of operations.

The DHQ spokesman said the Air component of Operation HADIN KAI also conducted series of Intelligence Surveillance Reconnaissance and air interdiction missions to reveal and destroy terrorists’ enclaves as well as their logistic supplies and equipment.

Onyeuko added that troops consistently struck Boko Haram and ISWAP strongholds throughout the theatre of operation.

He said during the offensives, several terrorists were killed and many equipment and weapons were captured.