Home General and News updates Why I have been serving Mami Wata for over 70 years- Gedehunsu,...
Facebook
Twitter
WhatsApp
Linkedin
Telegram 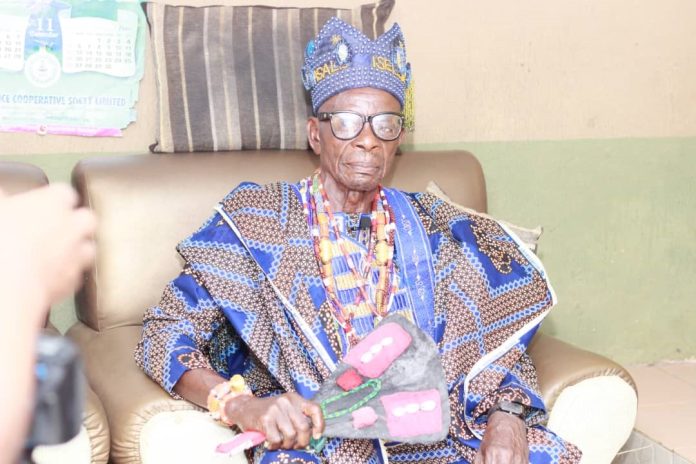 If you were a Christian or Muslim, how would you picture a priest or priestess of the water goddess, Mami Wata?

Like most adherents, you might imagine someone deeply involved in human sacrifice, dressed in a black, red or white cloak and engaging in bizarre violent rituals. At some point in this illusion, ghost-like creatures might often burst out of thin air, hovering above till they disappear in blazes of fire that would trigger vibrant earthquakes in the place.

All in all, a Mami Wata priest or worshipper is not the sort of person you’ll be willing to invite over to your house for your little daughter’s birthday party. Or be eager to wine and dine in their houses with your family.

But those are the sorts of stereotypes that Chief Aiseji Gedehunsu, a mermaid worshipper, wants to debunk.

Chief Gedehunsu, who claims to be 104 years old, said he had dedicated over 70 years of life practising traditional healing and worshipping the Mami Wata. He is originally from Benin Republic but resides in Lusada in the Ado-Odo Local Government Area of Ogun State.

Although the worship of Mami Wata may not sound like the familiar type of religion, Chief Gedehunsu, popularly known as Baba Dagbo, is happy to explain why his religion is misunderstood and stresses that it has nothing to do with devil worship.

Baba Dagbo spoke to AF24NEWS about how traditional religion affects his daily life, and how he has contributed to developing his community, helping humanity.

-‘Why I serve Mami Wata’

Baba Dagbo resides on the outskirts of Ogun State, but his exploits as a Mami Wata priest has made him popular beyond Lusada far into Lagos State.

Coming into Baba Dagbo’s house, along the Iyanosun Igbesa road, you will notice a big yellow concrete signpost at the entrance announcing that you’re about to enter the abode of a native doctor. On each side of the signpost are paintings of a chameleon and mermaid.

Going inside the compound, there are several bungalows, but the major ones that would capture your attention are the ones on the left side, where the two shrines are easily seen.

The first shrine has different mystic paintings, like a three-headed being, a serpent and other mysterious creatures. Baba Dagbo, says this shrine is where he prays to Mami Wata.

After the shrine, is another room, where he receives his guests and clients. Inside the room are two big pavements on both sides of the room, and the centre is Baba Dagbo’s chair.

Then the next shrine is located outside, not too far from the waiting room. This shrine is for Ogun, the popular traditional deity of warriors, hunters, blacksmiths, technologists, and drivers in the Yoruba region. Baba Dagbo, says he also conducts healings and prayers here too.

According to Baba Dagbo, he was born into a pagan family but inherited the gift of traditional healing from his father.

“I am a traditional medicine practitioner, I’ve been worshipping Mami Wata for over 70 years,” he said.

“You know that whenever the chameleon holds a twig, no matter how thin or weak, that twig cannot break in his hands. It means that messengers are not after money and we are only after giving the message from Mami Wata.

“That is what we’ve been sent to do. Our primary aim is to heal people from their physical and spiritual challenges. And when we heal you, if you offer us gifts, we’ll accept. Like the golden ornaments you see me wearing are gifts from a Ghanaian client that got healed in my shrine. But if a client is poor and doesn’t have any money, we’ll treat the person free of charge, and allow him or her to go in peace,” he said.

The Christian and Muslim faiths are two major religions that overshadow, and marginalise adherents of traditional religions. Hence not all Nigerians accept that freedom of religion extends to indigenous religious sects as well.

Little wonder it is common to see or hear some clerics declaring war on marine spirits and their worshippers. Or even calling out Mami Wata as a demon that possesses humans, using them as a vessel to wreak havoc on homes.

The Nollywood movies further fuel this notion. For example, traditional worshippers are often depicted as satanic and diabolical people that invoke fatal accidents to harvest the blood of the victims for their coven to feast on.

For Baba Dagbo, the aversion, misrepresentation and the diabolical impression attached to traditional religion are unnecessary, because he believes that traditionalists with both Christians and Muslims all serve the same God but in different ways.

He said, “I love both Christians and Muslims. I treat everyone free of charge whenever they come to seek help at my shrine. We all came from the same God. And I believe we are all worshipping one God but in different ways.

“No Christian or Muslim has ever come to challenge me here. I have never faced such a situation where anyone would come and ask me to leave worshipping Mami Wata and my traditional practice, to come and join their church or mosque. No.

“Here in my community (Lusada), we love peace. We have traditional worshippers, we have Christians and Muslims too, and we all associate and love one another. I welcome all of them to my shrine.

“I don’t understand why people think that people who worship Mami Wata are bad. Those that have come close to us mermaid worshippers can attest that we are plain and straightforward in our dealings. It is wrong to conclude that we are evil. Being traditional worshipers does not make us diabolical. We are good people. Even in our union, that has been our number one advice to every member.”

Having lived in Lusada for over three decades, Baba Dagbo now sees the community as home and would not mind being buried here when he passes on to the great beyond.

He said, “I am originally from Cotonou, Benin Republic, and I’ve been living in Lusada for over 30 years.

“Historically, Badagry and Cotonou are Egun communities, so the proximity encouraged me to come into Nigeria and practise my traditional medicine.

“From Badary, I migrated to Lusada. I was the first person to fully settle in this area. I, along with the Alangbara of Agbara, are the first people to settle in Lusada. Back then, the whole place was covered with bush. But I came in and worked hard to bring development to the community.

“Lusada was very peaceful when I came in. I saw it as a place where I could practise my craft, so I settled here, till I bought land and started living with my family.

“I’ve married four wives with 10 children but I’ve lost three of my wives to death, so I have only one still here with me now.

“Some of my sons are into traditional healing too and many of them have gone far above me.

“I love it here in Nigeria. I feel at home here. And whenever my time comes, I wouldn’t mind if my children decide to bury me here in Nigeria or the Benin Republic. I don’t mind at all.”

Chief Gedehunsu claimed the government had recognised his contributions to society and awarded him a certificate to allow him to practise his belief.

And for him, the only piece of advice he would give to every youth is for them to imbibe honestly in all they do.

Baba Dagbo urged them to be straightforward in their dealings “because by doing so they would achieve more.”